Adobe has just released the latest version of its popular Flash Player in testing mode, and it includes a bunch of features that allow developers to do new, beautiful and weird things with Flash content. These improvements should also help Adobe continue fending off competition from Microsoft’s upstart Silverlight platform.

Perhaps the coolest part of Flash Player 10 (code named “Astro”) is the integration with Adobe’s new Pixel Blender toolkit, through which developers can create scripts for filters, blend modes and fills — basically, a wide range of motion graphics and effects — that transform Flash content in real-time, to sometimes disorienting effect. (See one such transformation in the screenshot below.) Adobe even offers a Pixel Bender exchange where, as the name implies, developers can swap different effects that they’ve created. 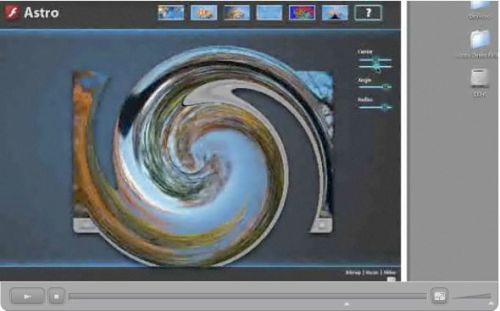 Other features include the ability to turn two-dimensional images into three-dimensional animations — say a rotating circle of cell phone photos, allowing you to compare them all — and more text options. Flash content creators will be able to include vertical and right-to-left text, which is crucial for compatibility with other languages.

Now, Adobe likes to brag about Flash’s 98 percent market penetration, and the fact that the last Flash update reached 62 percent penetration within three months of its release. By continuing to add new features to enrich the videos, widgets and websites built on Flash, Adobe is working hard to ensure that the Flash Player’s dominance continues in the face of competition from Microsoft, whose new Silverlight platform can also create fairly rich multimedia content. The features will also be incorporated into Adobe AIR, the company’s tool for creating web-desktop hybrid applications, and the Open Screen Project, a partnership that should help Flash gain a stronger foothold in the mobile world.