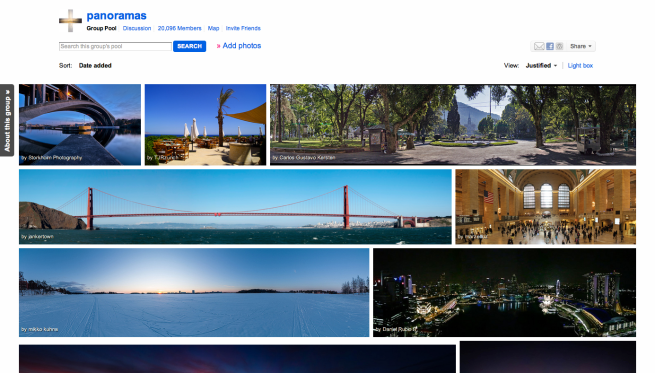 Trying to prove that its not dead yet, Yahoo owned-Flickr is releasing yet another batch of updates, but this time with the emphasis on improving its Groups.

Thursday, Groups on Flickr, the site’s community-shared photo pools, have been gifted with the acclaimed “Justified View” (pictured above) for a richer, more impactful photo-browsing experience. The Groups experience also now features a right-hand sidebar for additional photo context, and allows for direct photo uploads. Flickr has even released new Group APIs for third-party app developers.

Just how popular are Flickr Groups? There are more than 1.5 million groups on Flickr with a total of 1.2 billion photos spread across them, and 850,000 photos are added to groups each day, a Flickr spokesperson said.

The most arresting update to Groups is the introduction of the Justified layout, which features group photos in an image-centric, collage-like grid. The view reveals high-resolution images on scroll-over and includes a light-box option for a full-screen view of a selected image. Flickr members were first introduced to the Justified view three months ago when Flickr rolled out a revamped Contacts page.

The new Group sidebar is an interesting addition to the Groups experience and should stimulate conversation for the photo-sharers still active in their Groups. The sidebar, a part of the Justified view, surfaces the most recent discussions happening in a group, and highlights the top group contributors and tags.

Flickr members may also appreciate that they can now finally upload photos simultaneously and directly to their groups when using the new Flickr Uploadr tool. Why Flickr is just now introducing a direct-to-Group photo upload feature, however, boggles the mind.

The past three months have been jammed packed with Flickr feature updates, with development and vision spearheaded by head of product Markus Spiering who continues to promise significant changes to the product and user experience.

So far, Flickr’s feature-by-feature facelift has been as rejuvenating as an eyebrow lift or a chemical peel. Sure, there are some noticeable cosmetic improvements here and there, but the procedures, just as in real life, aren’t fooling anyone. A little nip and tick doesn’t appear to be the solution to bringing the photo sharing community back to the heyday of its youth.