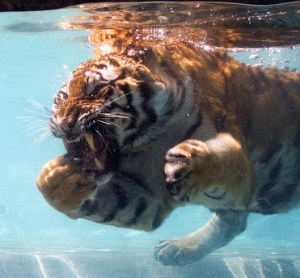 In its fourth quarter earnings report released today, Google announced that it would begin offering employees a one-for-one stock exchange option starting one week from today. The exchange will allow employees to trade their current stock options for options equal to the closing price per share of the stock on March 2, 2009.

The reasoning for this is simple: because Google’s stock has fallen so much over the past couple of years — from its highs of around $750 a share to its current state around $300 a share — many employees have options that are underwater — that is, the price at which the employees have the right to buy the shares is well above where the stock is currently valued. In fact, Google’s chief executive Eric Schmidt mentioned on the earnings call today that 85 percent of Google employees have at least some options that are underwater. But he also noted that the options are only expected to represent 3 percent of the total Google shares outstanding.

Many tech companies are facing similar problems with the economy in a rut. This one-for-one exchange is a reset of sorts. The hope is that such an exchange will entice employees to stay at Google whereas if they had stock options that were virtually worthless, they might be prone to leave for other pursuits.

Such a move does not come cheap for Google. From its release:

We expect to take a modification charge estimated to be $460 million over the vesting periods of the new options. These vesting periods range from six months to approximately five years. Assuming the offer proceeds according to our planned timeline, this modification charge will be recorded as additional stock based compensation beginning in the first quarter of 2009. This estimate assumes an exchange price of approximately $300 and that all eligible underwater options will be exchanged under the program. As a result, the actual amount of the modification charge is likely to change.

We currently estimate stock-based compensation charges for grants to employees prior to January 1, 2009 to be approximately $1.04 billion for 2009. This estimate does not include expenses to be recognized related to employee stock awards that are granted after January 1, 2009 or non-employee stock awards that have been or may be granted. It also does not include the estimated $460 million modification charge related to our employee stock option exchange.

Schmidt also noted on today’s call that employees who choose to trade in their options will have 12 months of vesting added to those options. Employees will have until March 3, 2009 to do this trade.

Update: The Google Blog now has more details. One interesting note is that while all Googlers are eligible to participate in this program, co-founders Sergey Brin and Larry Page do not hold any options. Neither does Schmidt.