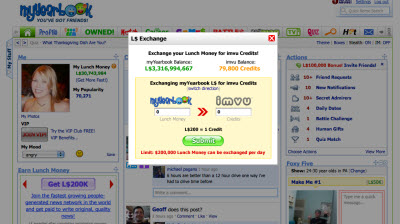 Two successful online sites are getting together to encourage their users to adopt the other’s services. IMVU and myYearbook are setting up a virtual currency exchange so that users from either service can exchange currency between the sites.

The deal is significant because it is a step toward a universal virtual currency, which could have profound implications for the economies of games and virtual worlds, creating the ability for fluid movement between different sites.

IMVU runs a site where teens and young adults make 3-D avatars and chat with each other in their own customized rooms. myYearbook runs a social network for young people. Both have millions of users who are spending money for virtual items.

Under the deal, users can exchange 200 myYearbook “lunch money” coins for one IMVU credit. Created by myYearbook, the system is called CurrencyConnect and it will be launched in the first quarter of next year. myYearbook is currently recruiting other partners to participate in the exchange program.

Cary Rosenzweig, chief executive of Palo Alto, Calif.-based IMVU, said in an interview that the exchange will be good for both companies in marketing to new users. Neither company is worried about losing its users to the other site, since it’s common for users to join multiple sites, Rosenzweig said.

Geoff Cook, chief executive of myYearbook, said his company is open to recruiting numerous sites. But both noted they have to be careful about who they invite to join. If they invited a site with gambling games, for instance, they would have to be careful about scrutiny of anti-gambling regulators. It’s OK to have poker games, for instance, if there is no way for the players to cash out their chips. But if the players can convert their coins into a virtual currency that can be converted into cash, then the regulators would cry foul. Accordingly, the Lunch Money from myYearbook can only be converted into promotional IMVU credits, which cannot be cashed out.

“Part of the secret sauce is to limit the potential for abuse,” Cook said.

Some of the safeguards include limiting how much currency someone can convert in a given day.

At the moment, the currency exchange rate is fixed between the two sites. But it’s possible the rate could float and the companies will study the results of the ongoing currency exchanges. The benefits are a lot like using tokens in mall arcades. When users had tokens to spend, they were far more likely to try out new games they hadn’t considered before.

“You can unlock silos of currency and encourage experimenting,” Rosenzweig said.

There are potential competitors. PlaySpan, for instance, provides a virtual goods platform for game companies and others to adopt. It has its own currency that can be used across games. But with the Currency Connect deal, sites can cut out such middlemen.