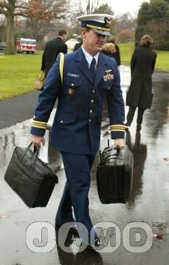 It’s well known that the President of the United States travels around with a metal briefcase that contains everything needed to launch a nuclear strike remotely if necessary. This case is nicknamed the “nuclear football.” It appears that Apple chief executive Steve Jobs has something along those lines, presumably at Apple’s headquarters, to kill iPhone applications if a problem arises with one.

“Hopefully we never have to pull that lever, but we would be irresponsible not to have a lever like that to pull,” Jobs told the Wall Street Journal in an interview.

This confirmation comes after speculation mounted in the past week whether or not Apple had the capabilities to remotely destroy applications on individuals’ iPhones. Apple has removed a few apps from the App Store but has yet to terminate any remotely on actual devices.

These “banned” apps include NetShare, a tethering app that allows you to use the iPhone 3G’s data plan on a computer. If any app is likely to be remotely terminated thus far, it would likely be this one as it would seem to conflict with AT&T’s terms of service. So far though, Apple has allowed the app to live on for those of us who purchased it before it was removed from the store.

What’s still confusing is why Apple is letting some of these applications it later bans through in the first place? After all, Apple has said it is approving each app before it’s made available in the store, hence the line of developers waiting for their apps to go live. Why approve an app only to ban it later? Certainly NetShare seems like it would have been an easy one to spot as a potential problem.

The $999.99 app I Am Rich was also removed from the App Store, but this was a “judgment call,” an Apple representative told the Wall Street Journal. Some users had said they downloaded the app accidentally, resulting in a very real $1,000 charge. While the app does basically nothing, its creator has said it is meant to be a piece of art. Apparently, Apple has different tastes in art.

It’s probably only a matter of time until Apple has to terminate a rogue app remotely. It’ll be a tough PR hit, but Jobs is right that not having such capabilities could potentially be far more catastrophic. After all, as phones such as the iPhone and ones built on the Android platform become less like devices just for making calls and more like mobile computers, they will be increasingly targeted by hackers.