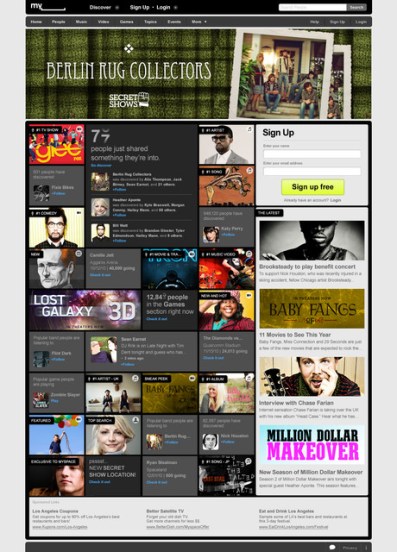 So what does “social entertainment” mean exactly? Instead of trying to compete with Facebook as a social network — a game Myspace has clearly lost since it’s been bleeding users steadily while Facebook has exploded in popularity over the last few years — the new Myspace will focus on sharing and finding music, television, games, moves, and photos. There’s also a new mobile version of the site in the works for mid-November that won’t require a Myspace account.

The News Corp.-owned website is also trying to reposition itself in other ways: It’s going by Myspace now, dropping the second capital letter as if it were some sort of vestigial appendage, and its new logo takes the word “space” literally with a gaping empty bracket — perhaps inadvertently revealing the void that remains in Myspace’s identity. 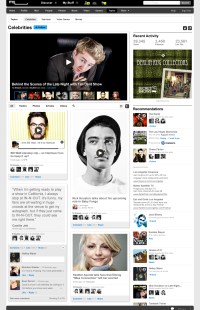 Judging from the screenshots, which inspire more hope than the previous redesign photos, Myspace is going for a cleaner and more elegant design with its pages — a far cry from the nightmarish page design that had become synonymous with the service. Users will be able to toggle between three different homepage views: The traditional list view, a magazine-like grid view, and a video-focused “play view.”

You won’t be trapped in the Myspace universe either. The new version of the site will let you share media from outside sources and broadcast yourself to Facebook and Twitter. There will also be loyalty mechanisms to promote profiles of users that contribute heavily to the community, including badges that users will be able to show off.

The reset is a big move for Myspace, and it’s probably the smartest move at this point. It’s still steadily losing users to Facebook, and it needs something, anything, to convince users it’s still relevant. The new Myspace can now easily coexist with Facebook, while potentially bringing something new to the table.

Myspace’s new beta version is available today to users in the U.S. and will roll out worldwide by the end of November.