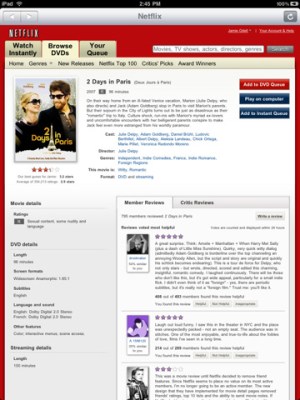 Update: Apparently NBC’s iPhone-compatible video streaming doesn’t work on the iPad. The story below has been changed to reflect that.

The iPad has just become every couch potato’s dream device. Today a slew of video-related news hit for the device, and even though it’s April 1, most of it seems legitimate. We have word of Netflix and ABC iPad apps, as well as CBS revamping its website to stream video to the iPad and iPhone.

News of the Netflix application originally came from AppAdvice last night, and like many, I had initially assumed that it was an April fool’s joke. But after Engadget pointed out that the Netflix and ABC app screenshots were coming directly from Apple’s servers, it seems less likely that the Netflix app is a prank.

From what we can tell, the Netflix iPad app gives you all of the functionality of the website. You can manage your queue, and browse for new Netflix titles. Most importantly, it will allow you to watch Netflix’s instant streaming titles on your iPad. We reported earlier last month that Netflix was surveying users on a potential iPhone application, and now that it seems we’re getting an iPad app, I’m sure an iPhone app isn’t far behind.

The ABC app will give iPad users access to all of the content currently streaming on ABC’s website, which includes shows like Lost and Greys Anatomy. Both apps are scheduled to be available on April 3, the iPad’s launch date. I also suspect that iPhone and iPod Touch users will be seeing it soon.

CBS is taking a different approach to making their content available. Instead of building apps, it’s developing an HTML5 version of its website that will be able to stream videos encoded in the H.264 format to the iPad and iPhone.

I suspect that many other websites will take a similar approach, instead of developing iPhone/iPad apps. Upgrading to HTML5 and H.264 standards will not only allow them to support the iPhone and iPad, but it will also ready them for other mobile platforms like Android and Palm’s Web OS.

NBC already has full episode video streaming available to iPhone users  at NBC.com, but according to AllThingsDigital’s Peter Kafka, it doesn’t appear to work on the iPad. Kafka also reports that NBC and Fox currently don’t have plans to support the tablet, although their content will be available if Hulu’s mythical subscription-only iPad app ever becomes a reality.