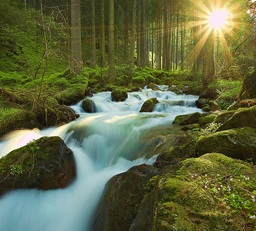 The business of renting DVDs through the mail has proven to be hugely popular for Netflix. The service came out of nowhere to pillage revenue from movie rental behemoth Blockbuster, and now Netflix is thriving as Blockbuster struggles to hold on. But Netflix’s business model is shifting, too, toward streaming movies over the internet. And it may be happening faster than anyone predicted.

So far this year, movie streams from Netflix are outpacing DVD shipments for the first time, according to sample data put together by the Netflix account analysis site FeedFlix. If this pace keeps up, 2009 could be the first year that movie streams outpace the service’s rentals.

Now, this data could be a bit misleading because it’s only from a sample of FeedFlix users, as the blog Hacking Netflix points out. And these users are undoubtedly more internet-savvy and thus more likely to stream movies through Netflix’s Watch Instantly service. But, it still seems reasonable to think that this will be the trend going forward for all Netflix subscribers.

When Netflix’s streaming service, Watch Instantly. launched in 2007, streaming numbers were just a tiny blip compared to DVD shipments. In 2008, they drew closer, as streaming became roughly half as popular as DVDs. But in the past several months, Netflix has aggressively expanded to get the Watch Instantly service off of the web browser and onto living room devices. This started with the Roku box and continued with Blu-ray players, TiVo and the Xbox 360 gaming console last year.

I have the service set up through the latter, and it’s really a brilliant experience. I have instant access to thousands of films and TV shows all for free with the Netflix subscription that I would pay for anyway.

When you start using Watch Instantly, and see all of the content available at your fingertips, it’s hard to stop — which the data also seems to suggest. I definitely stream more movies than I get through the mail now, and I would hardly consider myself a heavy user of the service. The trend is pretty clear that as Netflix continues to expand the service onto more devices in the living room, streaming will quickly outpace DVD rentals for anyone who has access to it.

And if Netflix is ever able to get new releases (it currently offers mostly back catalog films) onto Watch Instantly, the growth of streaming ought to be exponential.