Nokia, the world’s largest phone handset maker, is denying reports stemming from “industry insiders” that it is developing a smartphone that runs on Google’s Android software. Nokia said, “everyone knows that Symbian is our preferred platform for advanced mobile devices.”

However, the truth may be more complicated. Nokia is instead embracing something called Qt, a software toolbox for developers, which lets those developers port their applications to any of the major operating systems. At the moment, Nokia has released Qt so developers can use it while working on Linux, Max OS X, Windows, Windows CE, Embedded Linux and S60.

And Nokia should make Qt compatible with Android in the near future, we’re told.

So while it may be true that Nokia is not moving to build a device directly on Android, the end effect is that Nokia is going make it much easier for developers to build on the Android platform. That’s because Qt allows developers to work in any direction: They will be able to build on top of Qt, and then port to the Symbian platform, to the Android platform, or even the iPhone, for example.

This is part of a Nokia’s aggressive “cross-platform” developer strategy.

Nokia bought Trolltech, the company that makes Qt in January of last year for $153 million. Popular apps built with Qt include Skype, Google Earth and the Last.fm player. In January, Nokia moved to make it open source, as the company released Qt on a Lesser General Public License 2.1, essentially enabling developers to use it for free. There are still Qt licenses that aren’t open source.

(To confuse you even more, there’s also something called a Hybrid Qt, which is where a developer can build an application with both browser and native application functionality. It lets developers access a common services API and a QTCore library optimized for use with the popular browser base, Webkit. However, we’re hearing there is little activity here so far that has included Android, but that significant effort has gone into supporting Symbian, and others including Maemo, Series 40, and Desktop OSs).

The hoopla is significant because questions continue about whether Nokia may be considering ditching its existing operating system, Symbian. But the rumors, reported by the Guardian, that Nokia is unveiling a new touchscreen device at Nokia world conference in September on an Android operating system are unfounded, Nokia said.

It’s true that Nokia is under severe pressure to do something. It makes roughly 40 percent of all phones sold but has been losing its share in the market for smartphones — or those devices that can do things like surf the web and do other sophisticated computing tasks, such as email, and open and edit applications. The iPhone has been selling like hot cakes, but is proprietary. Google’s Android is also doing well, with multiple new handsets hitting the market over the next few months. But Android is open, and allows any device maker, including Nokia, to build phones on its software. 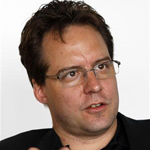 This morning, when the original story about Nokia embracing Android surfaced, we reached out to Symbian Foundation Executive Director Lee Williams (left) for comment. While he did not want to comment on whether Nokia is building on Android, deferring to Nokia for comment instead, he did say Symbian is also embracing Qt. He said it forms a key piece of the Symbian platform in 2010 and will let Symbian provide an OS that outperforms competitors (and is free and completely open). He said Qt would support Android soon. Here’s part of his email (our emphasis added in bold):

“The next generation UI for the whole Symbian platform implements a new Direct UI, preserves the world’s most widely used Focused UI, supports more screen resolutions and form factor standards, includes gesture and new sensor frameworks, and implements a collection of open and defacto industry standards, including a new QT core merged with Webkit, and yes, it exposes a strong graphics HW acceleration capability.…Qt is portable and will exist on many platforms and it would certainly be great for developers to see Qt on Android and iPhone and Windows Mobile, and…”

[Incidentally, Williams will be moderating a panel at MobileBeat2009 in San Francisco next week.]

Also, we happened to interview Benoit Schillings, Chief Technologist for Nokia’s Qt Software, on Qt back in January. Here’s part of the conversation:

VB: What is Nokia’s interest in having developers adopt Qt?

Benoit: The interest is about creation and inventing — as more developers use Qt, the more likely useful contributions or services will be easy to adapt to Nokia handsets.

VB: Let’s look at Nokia’s strategy behing this. Nokia’s got Trolltech QT, Maemo, Symbian. What’s the net effect of the changes of Qt in relation to Maemo and Symbian?

Benoit: Qt is a cross-platform framework providing developers the ability to use a single set of APIs when working on top of Maemo or Symbian, therefore simplifying the task and reducing the need to know the details of multiple platforms. Of course, the fact that Qt is also a good solution for PC application writing, or for other devices integration is another plus.

Benoit: The distinction between the PC market and embedded or CE type devices is more and more a blur. We really do see that this new license applies to all the platforms using Qt.

VB: You recently put a lot of work to get QT working with your Symbian (S60) operating system, how important do you think is QT for S60?

Benoit: Qt is a well known programming framework in the developer community, therefore by having Qt running on Symbian, we open for the Qt community a very large set of devices for their work.On the Symbian side, this an additional way to write applications, which is aligned with how programming is done in the PC and embedded world.