If you’ve used Twitter’s website in the past couple of weeks, you’ve probably noticed a small rectangle promoting its widgets and Twitter Search. It’s no accident that it looks like an ad unit, because it actually is an ad unit. Shortly, it will be used to promote a new project by blog advertising network Federated Media, and sponsored by Microsoft.

That project is ExecTweets, the latest third-party site to use Twitter’s immense amount of data to attempt to turn it into something useful for a narrower audience. The audience in this case is business users, as ExecTweets is all about pulling in tweets from various industry’s top executives who use Twitter.

This focus on business users is interesting in this case because much of the talk about Twitter’s eventual business model is that it will also focus on business clients. One of the rumored ideas what that businesses would pay a fee to be prominently featured somewhere on the service, in order to gain users. While this isn’t exactly that, FM and Microsoft are undoubtedly paying Twitter a pretty penny to launch their service in this featured area.

Perhaps even more interesting is that FM hopes this will be the beginning of a long relationship with Twitter when it comes to advertising/promotion, Matthew DiPietro     went on to say. And FM is hoping to work with other companies on similar projects.

But, why use ExecTweets rather than just follow the people on this list yourself? Well, the service offers a few advantages over a regular Twitter stream. The first is voting; if you see a tweet appear on the site that you think is a good one, you can vote it up. The more votes a tweet gets, the more prominently it’s displayed on the main page.

The second nice feature is “Top Links,” an area on the left hand side bar that shows links tweeted out by the execs. To me, the sending of links is one of the most useful features of Twitter, and I would actually be interested to know what high level executives are reading and find interesting.

ExecTweets also features a “Hot Topics” area of the site that is a tag cloud showing the most popular term being tweeted out by the executives. And it has a “Best of ExecTweets” rotating area in the upper right hand corner to again showcase the best tweets.

A few worries come to mind when thinking about ExecTweets. First, business executives are people too, and as such, undoubtedly use Twitter for mundane updates about their lives, and not just profound updates about business. FM told me there was no plans to filter out anything beyond offensive content that comes into the service. The thought is that people will like that it isn’t just all marketing speak coming from the executives, that users may enjoy the human side as well, DiPietro     tells me. 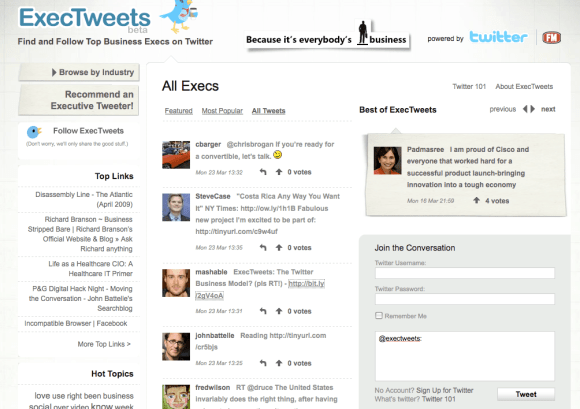 A second concern I have is about the voting system. Because you don’t need to log in to ExecTweets to use it, anyone can vote on the tweets. If the service becomes popular, this will be gamed. Of course, since ExecTweets is monitoring which Twitter users to include, it’s unlikely that any of these users will include spam or something truly game-worthy.

While Twitter’s promotion of the site could prove to be huge, FM is also making sure it uses the viral approach to spread the word as well. ExecTweets makes it easy for users to “Join the Conversation,” and does so with a large box to send out tweets to the executives of ExecTweets. Of course, it does this by inserting an @exectweets to lead off the message which then gets sent back to Twitter.

The same is true if I want to respond to an individual tweet I see on the service. Say I want to respond to something to AOL co-founder Steve Case tweets, if I do it through ExecTweets, it will show up on Twitter as “@exectweets @SteveCase:” A smart move for word-of-tweet marketing.

While you might think such a move by Twitter will finally silence critics who say the service has no business plan, I would guess that it will actually intensify it. If you prove you can fairly easily make a little money on your service, everyone will want to know why you aren’t making more.

But there will be more, and I’d bet a lot more. Twitter is clearly here to stay (or at least get bought for a huge amount of money) with services like SalesForce now using it as a key part of its customer service, and media organizations throughout the world promoting it like no other on mass mediums like television.

The San Francisco-based Twitter recently raised a new $35 million funding round, which puts its valuation somewhere between $230 and $250 million.