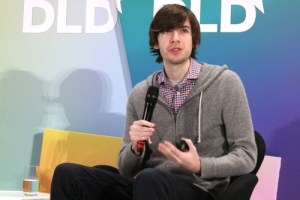 Interviewed by entrepreneur Martin Varsavsky, Karp talked about the company’s early growth, its decision to take the road less traveled in social networking, the unexpected advantages of building for creators, and Tumblr’s New York-centric culture.

“The early growth that we saw was around creators … our first community was those creators,” Karp said of Tumblr’s initial growth spurt. “We didn’t set out to build network .. all we wanted to do was make novel tools.”

But in building explicitly for creators, a widespread network of creators, curators and content consumers was born. Today, Tumblr powers nearly 42 million blog sites and is responsible for the creation of more than 16 billion posts.

The social platform intentionally avoided some of the standard features, including comments and tagging, of the garden variety social networking experience, Karp explained. “Commenting makes YouTube a horrible place,” he said, adding that being tagged in a photo on Facebook is sometimes an awful experience. Instead, Karp and team oriented the experience around the creator and the small company set out to build tools for that audience.

Those deliberate decisions have helped to set the startup apart from social competitors such as Google, Facebook and Twitter. Tumblr’s uniqueness extends to its New York company culture. The startup, he said, is going “all in” on the East Coast. It recruits talent from all over the country but, “everybody we are hiring, we’re bringing to New York,” Karp said.

“It’s been really wonderful being the underdogs,” Karp added of the company’s calculated decision to build a business away from Silicon Valley, widely considered to be the center of technological and social innovation.

So what’s next for Tumblr? The startup will continue to embrace its creator audience, but will also invest in reaching more international users, Karp said. Today, Tumblr is U.S.-centric with 45 percent of its audience stateside. The company will also use the months and years ahead to pursue “novel approaches to revenue,” as opposed to tacking on ads, that will fit the Tumblr community, Karp explained.