Twitter revenue president Adam Bain announced an hour ago that former Ticketmaster CEO Nathan Hubbarb will be joining Twitter as head of revenue. Judging by his tweets, the new Twitter executive will be a natural.

He’s clearly a connoisseur of the 140-character art.

Take, for instance, Hubbard’s own tweet announcing his new job:

To me, Twitter is a cardiogram of the passion of the live moment. So I’m excited to announce I’ve joined the flock as Head of Commerce!

Cardiogram of the passion of the live moment? This C-suite executive, fittingly enough for someone from the entertainment industry, I suppose, has soul.

His move to Twitter was presaged by this tweet, which likely no one really noticed at the time but in hindsight is perfectly clear:

Next step coming. My passion for the electricity of the live moment is inexorable. Was bored this week. Stay tuned (or, you know, unfollow).

And Hubbard is also not shy of using Twitter’s newer features — such as the carriage return that actually works — for an interesting effect. As he showed in this tweet about global tennis rankings: 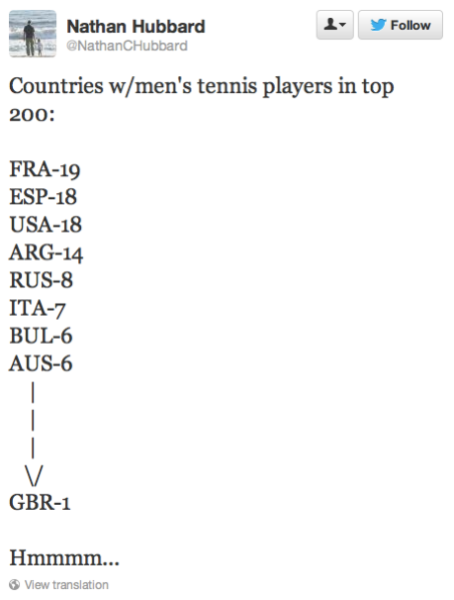 Twitter, of course, has been beefing up its monetization efforts for easily the past year, with geotargeted ads and retargeted ads as well as customer targeting, an Ads API and new API partners, and deals like a $200 million ad pact with Starcom and the Twitter Amplify program with partners like MTV. The company has also been hiring multiple people with IPO experience in preparation for an eventual public offering.

Hubbard will help with monetization, telling Bloomberg that “we’re going to go to people who have stuff to sell and help them use Twitter to sell it more effectively.” Integrating Twitter with cofounder Jack Dorsey’s new squeeze Square could make that happen very, very smoothly.

Meanwhile, Hubbard will likely keep having fun composing tweets like this:

Especially seeing he’s now at a much-more-loved company than the oft-despised TicketMaster.