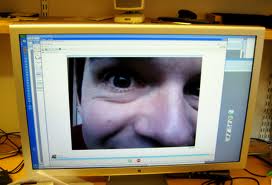 Vchatter, a video chat application originally launched on Facebook, announced Tuesday that it has expanded its service  to a standalone website.

As a Facebook app, the service has seen impressive growth since its launch in May, with 2.5 million active monthly users. But it’s now betting on growth outside Facebook, by providing personal URLs or website addresses for users, akin to the profile pages they have on other social networks like Twitter or MySpace.

The service allows users to easily chat with friends and even meet new people. If the idea of meeting new people creeps you out, the tie-in with your Facebook profile discourages undesirable behavior. In addition, the company has a bunch of tools that can eliminate inappropriate content, like nudity — a problem that has bedeviled Chatroulette, a much-buzzed about video site.

Having its own standalone site allows the company to add some features not allowed on Facebook proper, including the ability to meet people based on geography, gender, and age. The site can now provide individual URLs for users, giving the opportunity to have private video chatrooms as well as badges that users can put on outside sites to draw attention.

Several companies exist offering Facebook and website video chat, including Vawkr from Twisted Labs and YouCams. Those these two companies let users embed code to use video chat technologies, rather than a standalone site. While Chatroulette claimed it would fix this problem in its next version back in May, it struggled to relaunch its site and still faces problems with inappropriate use, according to the Wall Street Journal.

Facebook has its own text chat, and rumors of a Facebook video-chat service have been circulating, including a recent post on All Facebook about snippets of inadvertently revealed code on Facebook’s site that showed phrases like “waiting for your friend, “video call denied” and “incoming call.” The threat of competition from Facebook may have prompted Vchatter’s move to a standalone site.

The Menlo Park, Calif.-based startup was cofounded by Will Bunker, who previously cofounded dating site One-and-Only.com, which later became part of Match.com, now owned by Internet conglomerate IAC. The company recently closed a seed round of funding for $250,000 from a group of angel investors.