Pavel Durov is now out for good from Vkontakte (VK.com), Russia’s leading social network, which he founded in 2007. The company’s press service announced his resignation yesterday in a statement published by the Russian news agency Interfax.

“Judging by the news, I was fired today as the general director of VKontakte. Interestingly, the shareholders did not have the courage to do it directly and I learnt about my mysterious dismissal from the press,” Durov wrote on his Vkontakte page.

In an exchange with TechCrunch today, Durov said he was out of Russia with no plans to go back. “Unfortunately, the country is incompatible with Internet business at the moment,” he believes.

On April 1, Durov had resigned from his chief executive position, explaining that his freedom in running VK had been reduced by the recent shareholder change. On April 3, however, he withdrew his resignation, saying his departure would have affected VK’s future negatively.

Durov now sees in his forced resignation a move from the two main VK shareholders, the UCP fund and the Mail.ru group. “Now the site has moved under the full control of Igor Sechin and Alisher Usmanov,” Durov stated – an “inevitable development in Russian conditions,” according to him.

Sechin and Usmanov are widely seen as Kremlin-friendly oligarchs. The previous is said to be close to UCP managing partner Ilya Shcherbovich. The latter is the main shareholder of the Mail.ru Group, which could soon control 52 percent of the social network.

However, UCP stated that Sechin was neither its client nor a shareholder, Reuters reported. Furthermore, in what appears as a new development in an endless shareholder saga, the fund maintained that it had not approved Durov’s dismissal and that the question should be discussed at the next board meeting.

Durov believes his dismissal has been motivated by his “public refusal” to collaborate with the FSB, the post-Soviet successor to the KGB. It was for the same reason that he was forced to sell his remaining 12 percent of the company this past January, Durov claimed last week.

“On December 13, 2013 the FSB demanded that we disclose personal information on the leaders of Euromaidan [the Kiev-based movement that organized protests against the regime of former Ukrainian president Viktor Yanukovich]. Our response to such requests has always been ‘no,’ as Russian jurisdiction does not cover VKontakte’s Ukrainian users. Giving Ukrainians’ personal data away to Russian authorities would not only have been illegal, it would also have been disloyal to the millions of Ukrainian citizens who trusted us,” Durov explained. 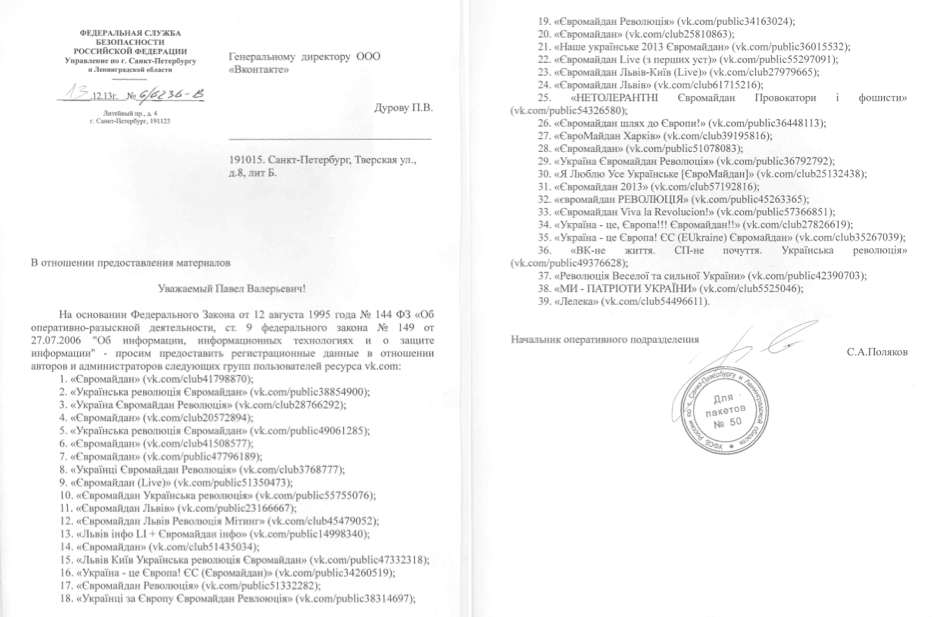 Above: Durov has displayed an official two-page letter that the FSB allegedly sent him in December. The letter contained a list of 39 VK.com users among Ukrainian organizations and individuals that the Russian security service believed deserved scrutiny.

Durov emphasized that he did not regret his considerable loss of property — VK was recording some 60 million daily visitors at the time — since protecting personal data was worth it. “I haven’t held [VK] shares since December 2013, but keeping a clear conscience and defending my ideals is more important,” he pointed out.

In another post on his page, Durov said he had faced pressure from another powerful Russian agency for weeks over his repeated refusal to pull the plug on an anti-corruption online community led by Alexei Navalny, a prominent Russian opposition politician and blogger.

“On March 13, 2014 state prosecutors demanded that I close down Navalny’s anti-corruption group and threatened to block VKontakte if I didn’t. I didn’t do that in December 2011, and I certainly won’t do it now,” he maintained.

Durov emphasized that what he labeled “political censorship” is something neither he nor his team will ever engage in, as “the freedom to disseminate information is an undeniable right in a postindustrial society … [and] the absence of it would render VKontakte’s existence meaningless.”

VKontakte was nevertheless accused two years ago of collaborating with state security services to counter anti-Putin activity by its Russian users.