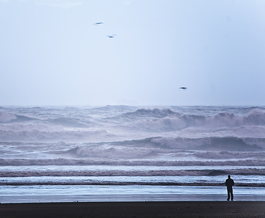 When you hear that Google has an internal project it’s working on codenamed “Ocean,” you might assume that it’s the new Google Earth element that was unveiled today as part of Google Earth 5.0 — but you’d be wrong.

The project is something else that Google is apparently working on, Google’s senior vice president of search product and user experience, Marissa Mayer, disclosed today at the Google Earth event. She did so as an anecdote for her story about Google Earth’s new ocean layer, remarking that the use of the word “ocean” at first confused her because she thought engineers were talking about a different internal Google project.

So what is Google’s other “Ocean” project?

Google, the search engine, is basically useless for information on it thanks to the Google Earth announcement today. You simply cannot type the words “Google” and “Ocean” without getting a result about today’s unveiling.

And Google has embarked on an ambitious secret effort known as Project Ocean, according to a person involved with the operation. With the cooperation of Stanford University, the company now plans to digitize the entire collection of the vast Stanford Library published before 1923, which is no longer limited by copyright restrictions. The project could add millions of digitized books that would be available exclusively via Google.

But that project has long since been outed to the public, so why would Mayer still call it by that name? Perhaps it’s just a case of old habits dying hard. Mayer has been with Google since 1999, she was one of the first 20 employees at the company, so maybe she was just making reference to the old project codename.

It would seem a bit odd for Google to basically have three projects that could all be known as “Ocean,” but who knows, it could be. I’ve contacted Google for some clarification, and will update when I hear back.

Update: I haven’t heard back from Google officially yet, but a former Google product manager tells me that “Ocean” was in fact the original name for Book Search and that they’re “99 percent” sure that’s what Mayer was referring to.

They went on to say that internal use of codenames for Google projects became such a problem at one point that the executive management group basically mandated that codenames couldn’t be used for launched products anymore since it was so confusing (as it apparently was to Mayer with Google Earth Ocean and Google Ocean).