Last year, the car industry was abuzz with interest in autonomous vehicles, largely spurred by technology companies like Google, Tesla, and Uber. Since then, more than a few car makers have entered the space, and during this year’s Consumer Electronics Show there was plenty of talk about an impending generation of vehicles that won’t require human assistance.

While the phrase “self-driving” gets tossed around a lot, the truth is that not all “autonomous” cars are the same. In fact, four years ago the U.S. Department of Transportation’s National Highway Traffic Safety Administration (NHTSA) established five levels of autonomous driving. This is helpful in understanding the capabilities of individual vehicles, but what does it really mean for the industry? A new report from Altimeter Group seeks to provide clarity on the matter, dissecting the developments of 26 automotive makers and 50 technology providers to see which companies have a good shot at dominating the market by 2021.

Entitled “The Race to 2021: The State of Autonomous Vehicles and a ‘Who’s Who’ of Industry Drivers,” this two-year study by analyst Brian Solis indexes the key players in the autonomous industry. In no way is this a final version — he invites feedback and is constantly updating the report (similar to the “State of the Internet” report produced annually by Kleiner Perkins Caufield & Byers’ partner Mary Meeker). 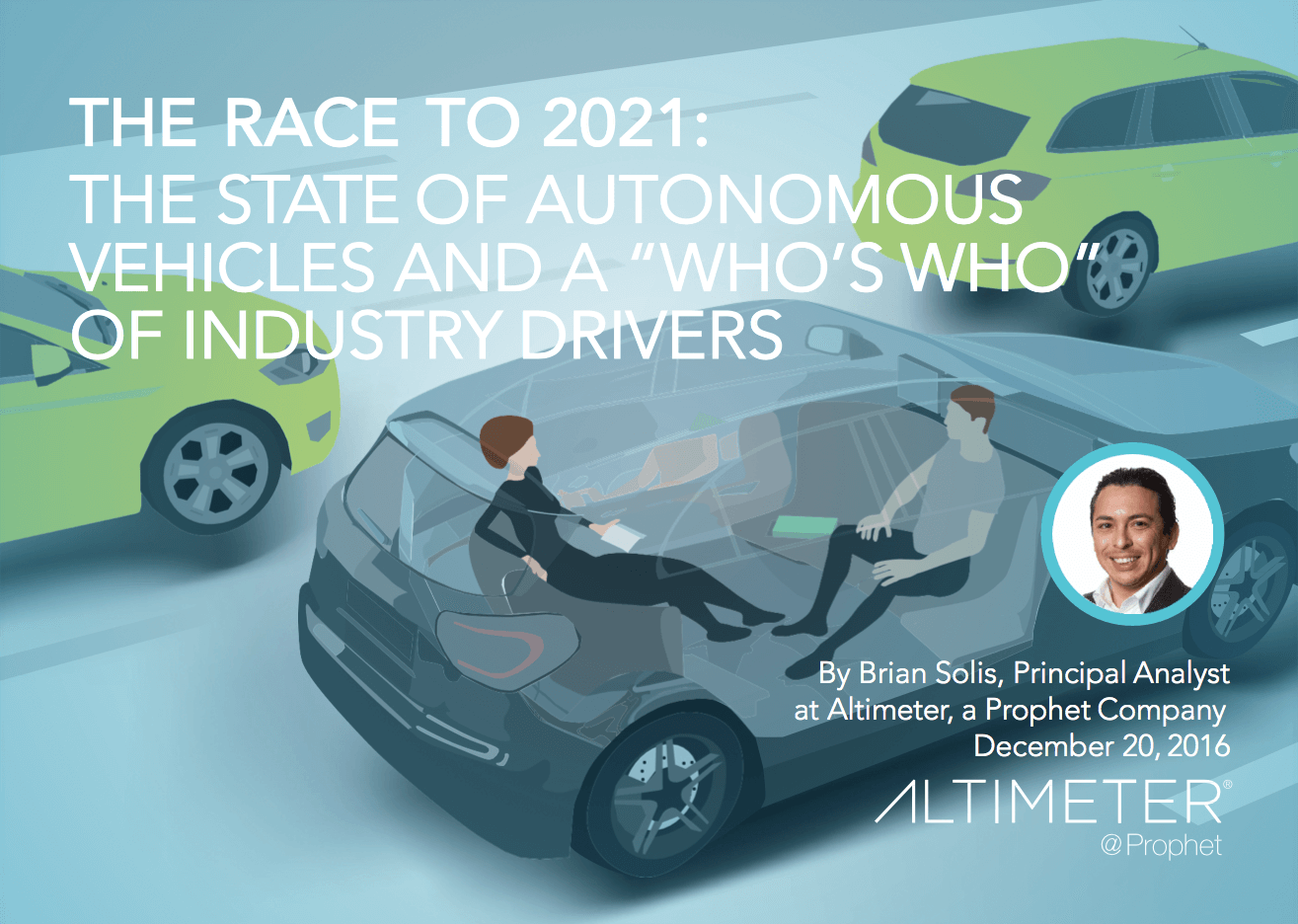 Above: “The Race to 2021,” a report by Brian Solis on the state of autonomous vehicles.

“2021 is the year auto manufacturers have promised fully autonomous vehicles on the road,” Solis explained. He admits that he doesn’t think we’ll see mass consumer adoption by then, but perhaps some cities and communities will have evolved to accommodate this latest technology shift. Within four years, Solis thinks Level 5 self-driving cars will be in the market but will be limited to testing along fixed public transit courses, universities, and inner-city ride-hailing services “where infrastructure and pedestrian laws have been adapted for safety.”

He posits that consumers are largely still wary of autonomous vehicles, with concerns about viability, ethics, and trust. “They want to drive a vehicle with semi-autonomous features, and automakers are introducing these features in waves to tame fears and humanize the technologies before fully autonomous vehicle release and adoption is feasible” Solis wrote.

This 93-page report is designed to educate and to provide a snapshot of where the industry is at this moment. As this is the inaugural edition, Solis begins by introducing the different levels of automation, starting with the traditional driving experience and moving all the way to fully autonomous scenarios in which drivers are no longer needed. From there, the bulk of the report evaluates the 56 companies that have been evaluated in this field, including manufacturers like Audi, BMW, Chrysler, Ford, John Deere, Tesla, and Volvo, along with those who specialize in driverless hardware and software, such as the 5G Automotive Association, Apple, Comma.ai, and DeepScale. 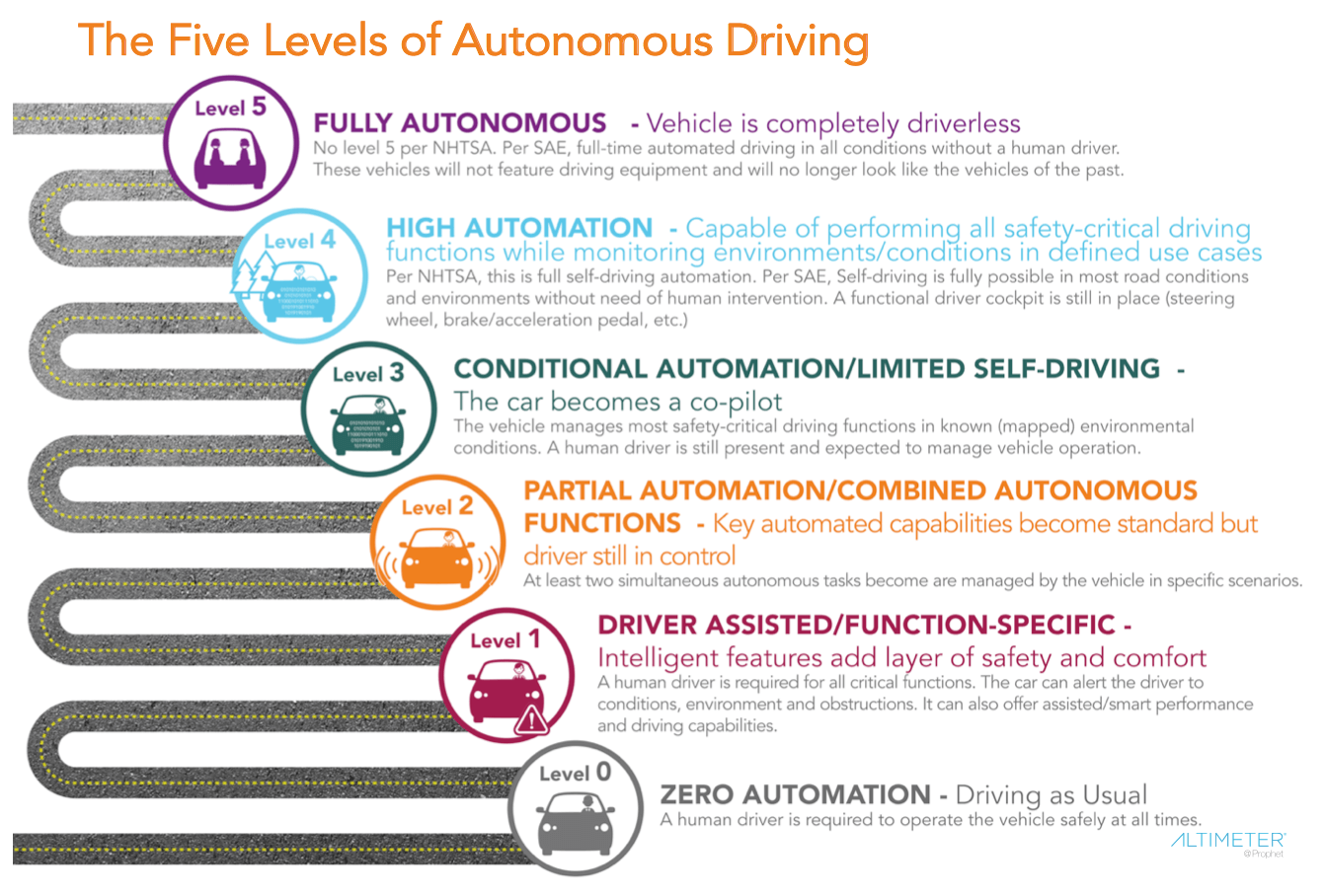 Above: Understanding the levels of autonomous vehicles according to the U.S. government

Those building accessories — such as mapping sensors and vehicle-to-vehicle communication — are also examined. In each instance, the report doesn’t just name the players in the area; it provides a synopsis of their latest developments, along with any pertinent statements, and more.

The future of cars and the new ‘Gold Rush’

There’s certainly no shortage of speculation as to what the cars of the future will look like, and they have garnered plenty of headlines in the past 12 months. Uber is one of the most vocal about moving forward with self-driving cars through its new Carnegie Mellon unit. The on-demand car service brought its vehicles to San Francisco to accelerate testing but was quickly rebuffed — it then shifted gears (no pun intended) and moved to Arizona, where it received a more welcoming reception.

Google has also been at the forefront of this burgeoning industry, having spent at least eight years working on autonomous driving technology. In December, the self-driving car project was spun off to become Waymo and is now led by John Krafcik, the former president and chief executive of Hyundai North America. The company recently sued Uber, alleging patent infringement of its self-driving car technology. 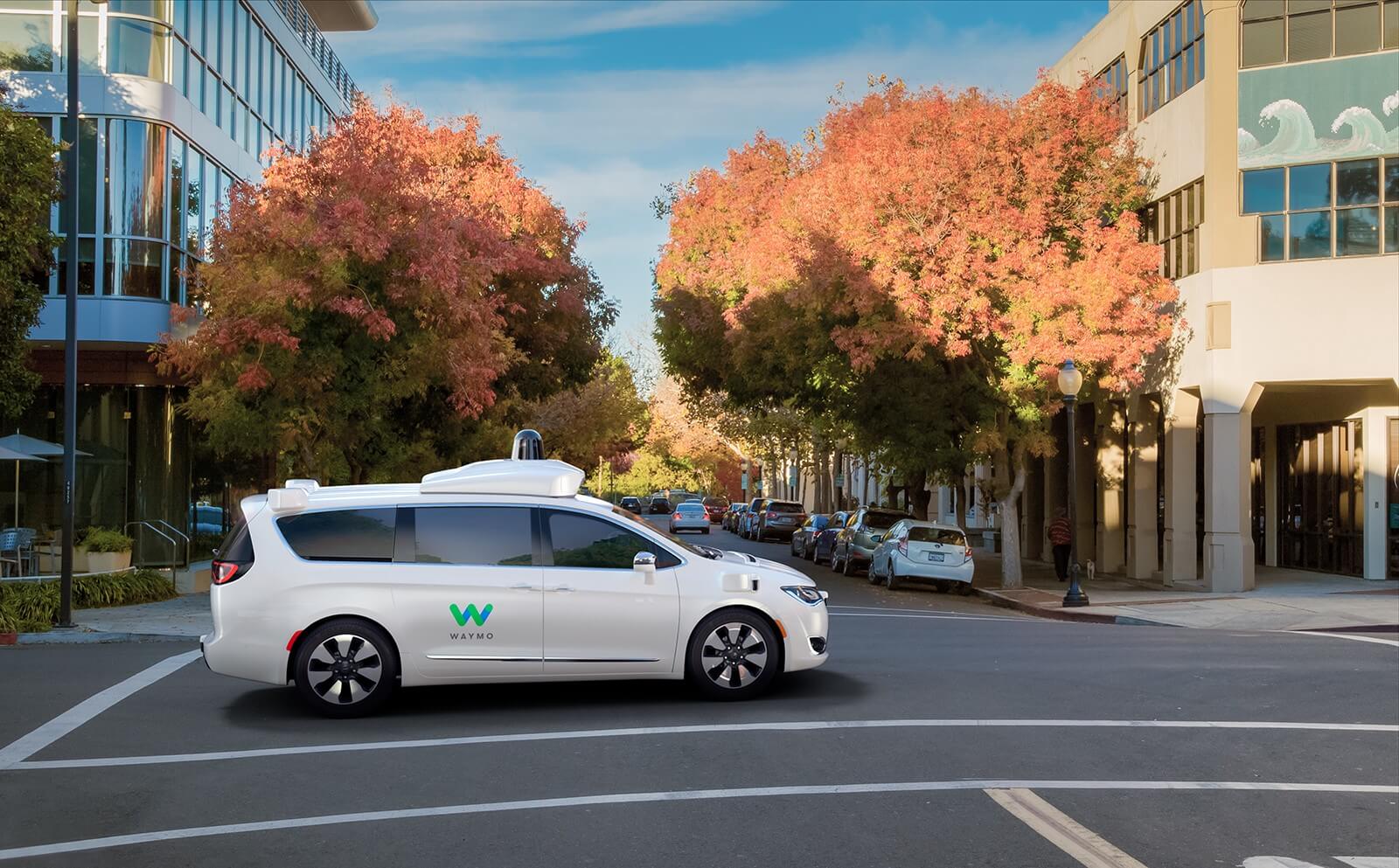 Other tech companies that have been exploring autonomous vehicles in some way, shape, or form include Apple, Baidu, Lyft, Comma.ai, Mobileye, and, of course, Tesla.

These companies have spurred incumbents such as Toyota, GM, Ford, and Honda to accelerate their own efforts. Recently, automakers have been exploring the use of artificial intelligence and machine learning as they search for ways to grant vehicles greater autonomy while ensuring drivers and riders are safe and having a positive overall experience.

One might imagine that these companies are all at roughly the same level of development, but that’s not really the case. Some — like Google, Uber, and GM — have already begun testing vehicles in various markets, while Tesla has had autopilot in vehicles for over a year (although there have been glitches that have given some owners pause). Other automakers have simply launched prototypes with over-the-top features, like Faraday Future, or opted to augment the vehicle’s intelligence by improving communication with sensors to predict and prevent accidents and for other scenarios. And then there are the concept cars that illustrate creative thinking but may never actually come to market. 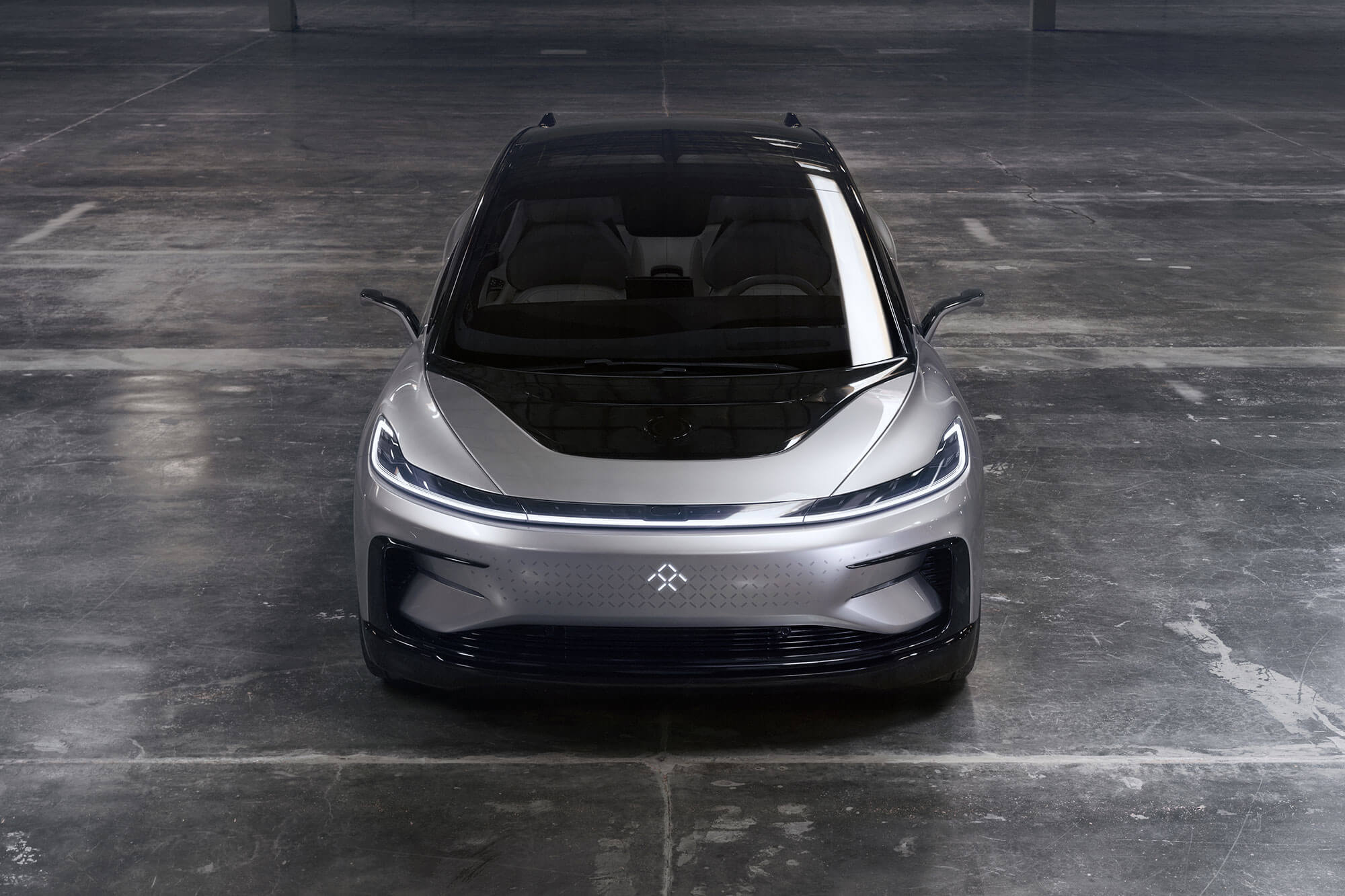 Above: The FF 91, the first prototype car from Faraday Future. The electric car was unveiled at the 2017 Consumer Electronics Show.

To avoid falling behind, incumbents have turned to the tech firms that are impacting their business, electing to either come on as investors or acquire them outright, as GM did with Cruise Automation in 2016 for $1 billion.

The report describes development of self-driving cars as the new “gold rush,” with incumbent automakers reallocating resources to accelerate work on the technology. Spurred by the likes of Google, Tesla, Uber, and other technology companies, “Detroit and auto capitals around the world were pushed to accelerate self-driving programs to appear innovative and not lose brand equity.”

Get ready because it’s coming

“The race towards self-driving vehicles is as much about technology as it is about city infrastructure and governance,” Solis said. “From lanes and lights, to signs and obstructions, to rules and regulation, [and] government, cities are working with manufacturers to redesign city infrastructure to optimize flow and safety.”

And he’s not wrong, though regulators have been struggling to facilitate innovation while protecting the safety of the public. But with automakers and tech companies working hard on the next generation of transportation, it behooves governmental agencies to look at the coming wave of smart vehicles and find ways to not only provide data to support them, but also ensure that the right laws and regulations are in place. And let’s not forget about other stakeholders, such as insurance companies, who will be disrupted by the proliferation of autonomous vehicles on our streets.

Solis calls the next era Automotive 2.0. And while some may consider it a cheesy moniker, he thinks quite the opposite. It represents the changing relationship we have with our vehicles and our understanding of what it means to get from one place to another. Solis opines that vehicles will become distinguishable based less on how well they accommodate drivers than on what they can offer passengers.

In addition to looking at the companies in the space, his report considers the applications that are being built. Solis identifies five areas of focus: logistics, industrial, purpose, transportation, and consumer. Within these categories, there are dozens of in-depth use cases, such as autonomous vehicles used for cargo (for example, Otto, which Uber acquired late last year), as well as delivery, commuting, retail, shuttles, mass transit, medical transport, tourism, military, construction, farming, and more. 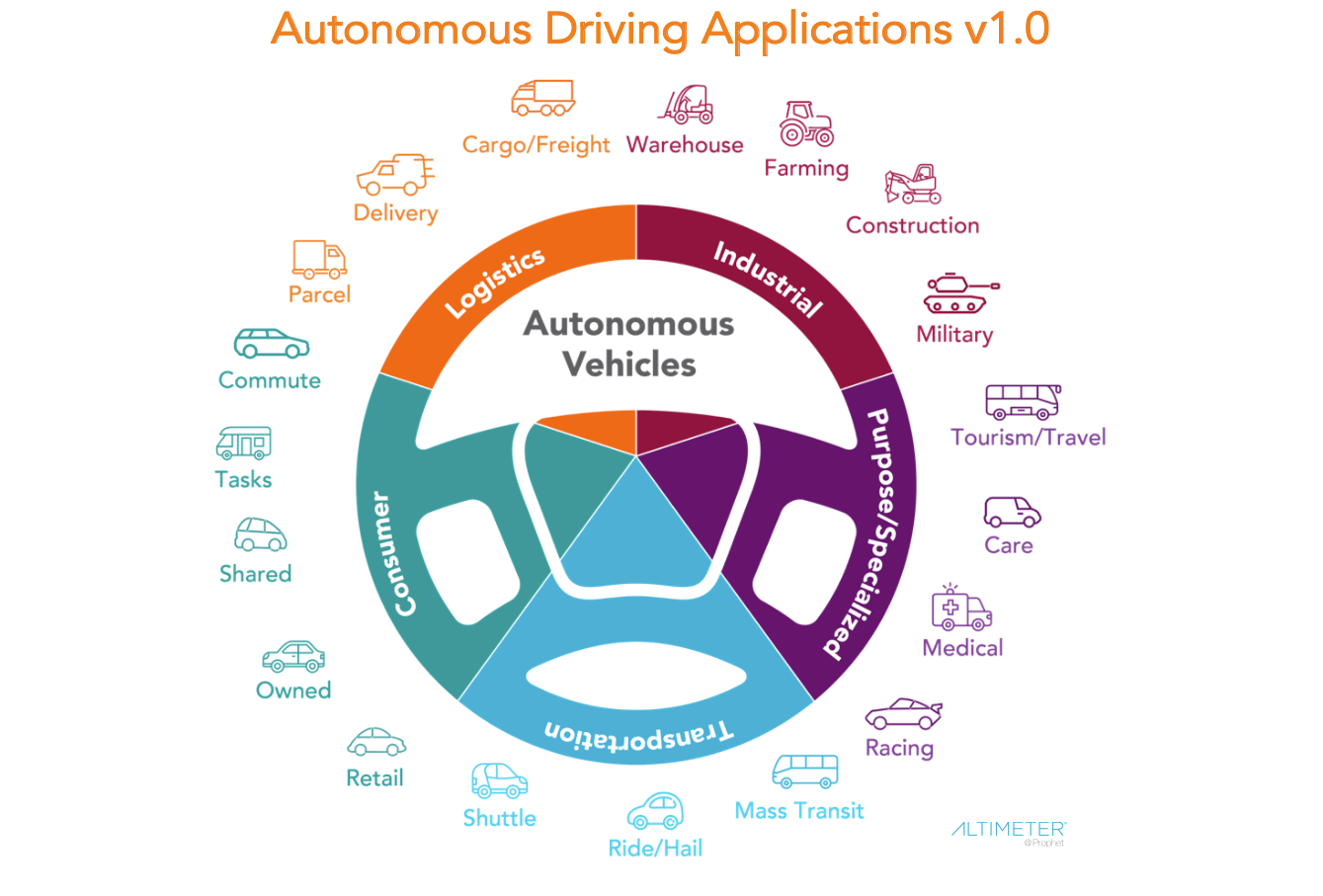 Above: Applications for autonomous driving, produced by Brian Solis for his “Race to 2021” report.

As mentioned earlier, “The Race to 2021” is an evolving research effort. So while Solis warns that cities, government agencies, communities, and companies are not doing enough to prepare for the onslaught of self-driving vehicles, his findings may well change by next year’s report. Some unanswered questions include the impact of security concerns, the technology’s influence on other areas of transportation, how these changes will affect people working in the traditional auto industry, and more.

It will also be worth watching how Solis’ analysis compares to that of other experts, such as the tempered expectations from Morgan Stanley (subscription required) released earlier this month.

“There is no finish line to cross for autonomy,” Solis explained in his report. “It’s now a matter of when a vehicle requires human intervention or not. Along the way, there will be, and already are, intelligent features that introduce self-driving capabilities to those willing to pay for them. Over time, everyday and professional drivers will come to grips with this new reality, one iteration and innovation at a time. But this renewed perspective will co-exist with traditionalists for the foreseeable future.”