Popular city transport app Citymapper has taken the next step in its efforts to transform urban mobility with the announcement of a new taxi-sharing service in partnership with Gett.

This latest initiative comes just a few months after Citymapper launched its first commercial bus service in the U.K. captial.

If you’re unfamiliar with Citymapper, it’s basically a mobile app that rose to prominence in London with its user-friendly interface that pools multiple transport options to help identify the most effective route to your destination. Since 2011, Citymapper has landed in dozens of cities globally, including New York, Boston, San Francisco, and Tokyo, and the company has bagged around $50 million in funding.

Gett is an Uber-style on-demand cab app that operates across Europe and the U.S., and it’s used by more than half of all black-cab drivers in London. Last December, Gett launched a new carpooling service called Gett Together, which allows multiple riders to hop in and out of cabs on pre-defined routes during rush hour traffic. In London, black cabs can access bus lanes, which means they are usually a faster option than normal car transport (including Uber). 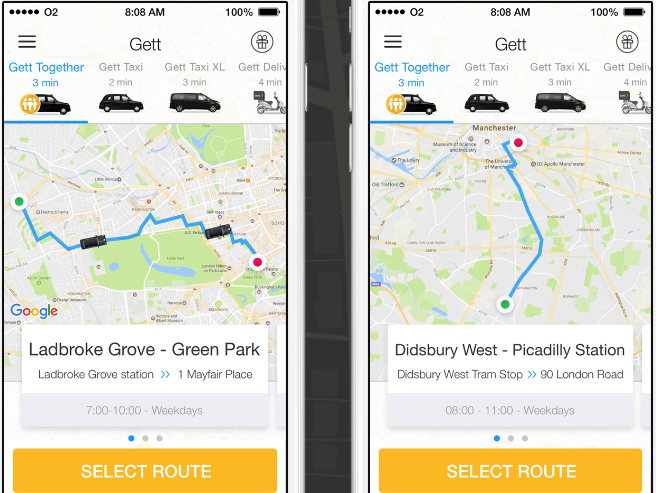 Above: Gett Together: Choose your route

With Citymapper now in tow, the duo are launching a new fixed-route service in London, using Citymapper data to establish gaps in the city’s existing transport network. Citymapper is already used by millions of people around the world, which means it has the data to determine where people are trying to get from and to, 24/7.

Citymapper’s existing night-time bus service covers a limited, pre-set return route from Aldgate East to Highbury & Islington, just like normal buses. Except with Citymapper, riders get a large screen showing where they are in real time, along with USB charging ports and other bells and whistles. These technological smarts are really just for show, however, as the real point of the exercise has been to demonstrate how data can be used to fix urban transport.

While the bus service was aimed at night owls, Citymapper’s tie-up with Gett is all about carpooling commuters, operating from 7 a.m. to 10 a.m. and 5 p.m. to 8 p.m. The BB1 (Black Bus 1) route runs between Highbury (north of the river) and Waterloo (south of the river) for a fixed price of £3 ($4), with riders stipulating their pickup / drop-off points in advance through the Gett app.

However, the route is integrated into the Citymapper app, meaning travelers will see this travel option when searching for a journey that falls within Gett’s area of coverage. 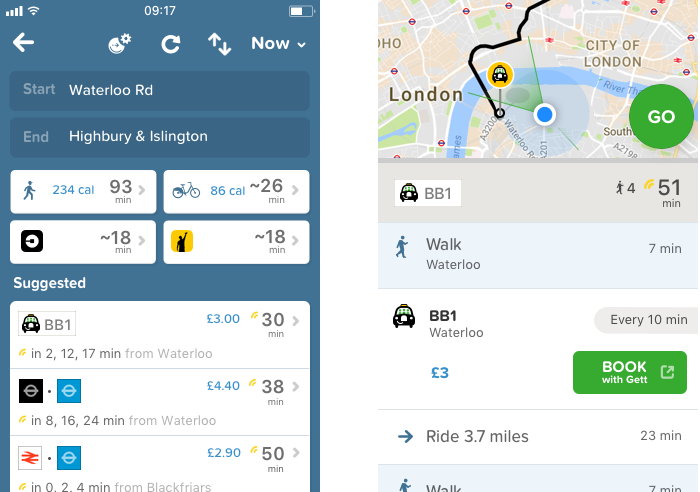 Above: Gett in Citymapper

“BB1 connects Highbury to the south, unlike any tube line,” Citymapper noted in a blog post. “Existing trips would require three buses or tubes. It serves one of the largest gaps in the tube in Zone one: Angel to Farringdon. It uses side streets that avoid jams and benefit from bus lanes — which may be particularly useful since Angel station is currently undergoing construction with major roads blocked.”

While Citymapper is known as a software-based transport service, it is interesting to see it shift into the hardware realm via buses, and now taxis.

While some may question how a fixed-route taxi service helps solve the overarching problem of road congestion in a city already bursting at the seams, it’s worth noting that people already use traditional taxis to traverse the city, while upstarts such as Uber have also made a significant impact.

What Citymapper is doing here is targeting a commuter segment that may not otherwise have considered taking a taxi, or would have jumped into a taxi on their own. This way, Citymapper and Gett can fill spare seats, while commuters pay a price that’s more akin to hopping on a bus or train.

For Citymapper and Gett, as businesses, BB1 demonstrates how data can be used to inform public transport infrastructure, which is ultimately one of the main goals.

“It points to the future of public transport,” Citymapper added. “We can respond quickly to user needs, by editing and evolving the route as we learn. Regular buses can’t do that. The future of the city should be smart, shared, and responsive.”