Virgin Hyperloop has demonstrated that it can transport humans over a hyperloop system, and now it’s trying to convince everyone that this idea of transporting people at 670 miles per hour isn’t a crazy pipe dream.

The company, which is part of Richard Branson’s Virgin empire, released a video today showing its vision for hyperloop transportation and how it will work. It’s a pretty ambitious project and it could take years to build out. But it could very well be the first new form of mass transit to materialize in more than 100 years.

The video shows details of the “smart vehicle, dumb road” commercial system architecture, including the onboard levitation engines, propulsion engines, and high-power batteries that have never been publicly shown. In addition to the technical details, it also dives into the value, sustainability, and economics of those design choices. Virgin has talked about this a lot, but this video makes it digestible.

Virgin Hyperloop aims to send passenger or cargo pods at speeds that approach those of air travel. The 670 mph target number is three times faster than high-speed rail and more than 10 times faster than traditional rail. That means you could go from San Francisco to Los Angeles in about 30 minutes.

The idea came from Robert Goddard, the rocket scientist who speculated about the concept in 1904. It was depicted in the 1973 sci-fi film Genesis II, produced by Star Trek creator Gene Roddenberry. Tesla CEO Elon Musk mentioned his idea to actually build it in 2012, and he assigned a team of engineers to design it. He released the hyperloop designs as an open source project, and other companies picked up the ball. 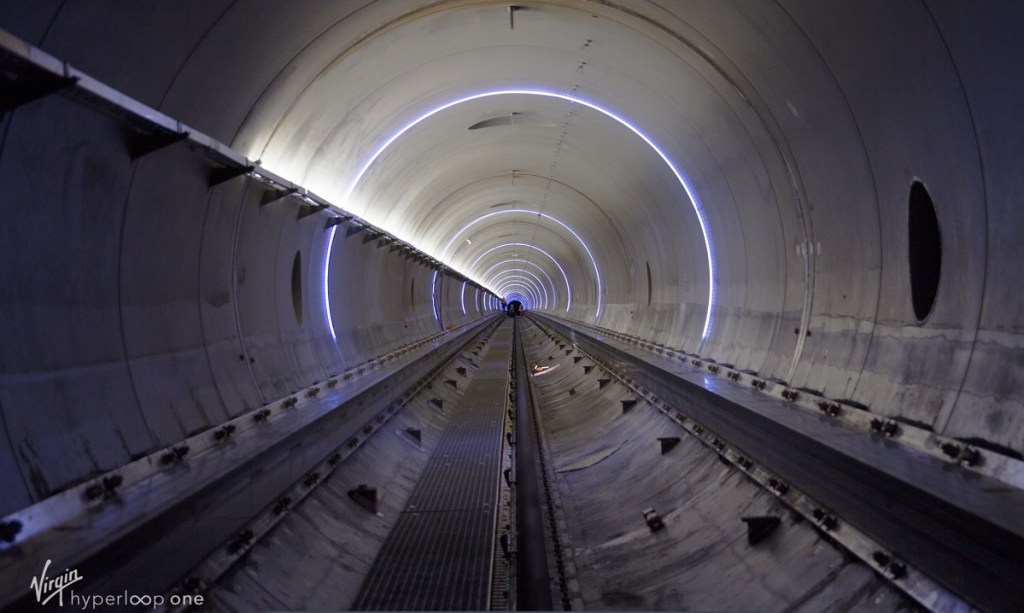 Above: A Virgin Hyperloop One test track in Nevada.

The idea was to create magnetically levitating trains in nearly evacuated (airless) tubes. Without the friction of air, the pods in the tubes could travel at much faster speeds.

Los Angeles-based Virgin Hyperloop, formerly Virgin Hyperloop One, has raised over $400 million in private capital since its founding in 2014. It is working to develop and commercialize hyperloop software and hardware, with nearly 300 full time employees in the United States. At the DevLoop test site outside of Las Vegas, Virgin Hyperloop has completed over 500 tests of the technology, including with human passengers.

Governments and big businesses of the world are embracing the idea. The $1.2 trillion infrastructure bill making its way through the United States Congress has provisions that will support further development and deployment of hyperloop.

Virgin Hyperloop argues that it will have a lower environmental impact than other modes of travel, and it has the same G-forces as rail. Centralized control will keep the pod travel safe. The company says that several pods can depart per minute, and the system does not require stops at every station. Virgin Hyperloop wants to transfer 50,000 passengers per hour in an on-demand fashion; that’s the equivalent of a 30-lane highway.

As you can see in the Virgin video, the trip is being designed as a luxury experience. Other countries, including India and Saudi Arabia, are vying to be the first to establish a hyperloop certification track and reap the potential economic benefits. Of course, there are plenty of engineering matters to consider, such as protecting the hyperloops from earthquakes and terror attacks.

Virgin Hyperloop is creating the XP-1 hyperloop pod, and it has tested its design at speeds in the hundreds of miles per hour.