Four former Google software designers who helped create its mail and mapping services have started a new Silicon Valley company Friendfeed, to help you track news items your friends are reading and their other activities.

It centers around a feature made famous by the popular social network Facebook: The “feed,” which gives you a steady stream of news about what your friends are doing, i.e., what they’re reading, what applications they’re adding, videos they’re viewing, and so on.

But Friendfeed goes a step beyond Facebook’s feed. It gives you a feed from your friends’ activities on 23 other networks, too. For example, it lets you see what they’re reading on Digg and Slashdot, what they’re watching on Netflix, YouTube or Flickr, or listening to on Last.fm.

There’s a huge upside and downside: On the up, it lets you finally track lots of core activities of your closest friends. On the downside, it requires significant investment, and dealing with even more noise than already have. All your friends have to sign up, if you want to see all their activities. Already, we know of people who have tired of all the updating on Facebook. Do they want more? Friendfeed walks the fine line between the simplicity of a Twitter (simple updates from friends) and being a firehose blasting you with more than you can handle.

The company was started by Bret Taylor (left) and Jim Norris (right), two of the original Google Maps engineers. They incubated the idea at Benchmark Capital, a well-known venture capital firm (see our coverage). They later teamed up with Paul Buchheit and Sanjeev Singh, two of the creators of Gmail. Buchheit, who led Gmail project, tells VentureBeat the company isn’t ready to release details today about funding just yet, but hopes that an announcement can be made soon, perhaps as early as next week. We suspect the final terms are being ironed out, because both sides aren’t saying much. “We’re delighted to be able to work with these very talented entrepreneurs,” Benchmark’s Peter Fenton messaged us through a spokeswoman, with the excuse that he was at the firm’s day long partner meeting and couldn’t say more.

Since leaving Google, Buchheit has been investing in start-ups, and so this is a new turn for him. Buchheit told us several months ago he was looking for a better way to track news.

The New York Times first ran a story about Friendfeed story this morning.

The “meta”-feed is not trapped inside Facebook, but can run anywhere. It can run within an application on our Facebook account or on your Google homepage.

Of course, a number of other content sharing sites exist. However, none of them have focused on aggregating news feeds in this way. With one exception: Mogad, which we wrote about here, but which is in very early days. Most notable about this is that Aydin Senkut, an investor in Mogad, and also a former Google employee, sits in the same office with Buchheit on Ramona Ave in Palo Alto. The launch of Friendfeed could make for some interesting (heated) conversations over there :)

Some other sites we’ve written about, including Spokeo and ProfileLinker (see coverage), have let you aggregate profiles of your friends and what they’re doing, but they haven’t really taken off — and haven’t focused on streaming feeds.

When you sign up for an account (it is limiting a the number of accounts it is giving out; you must sign up on the site), the company lets you tell it what sites your participate on, so that it can track you. Your friends have to do the same. 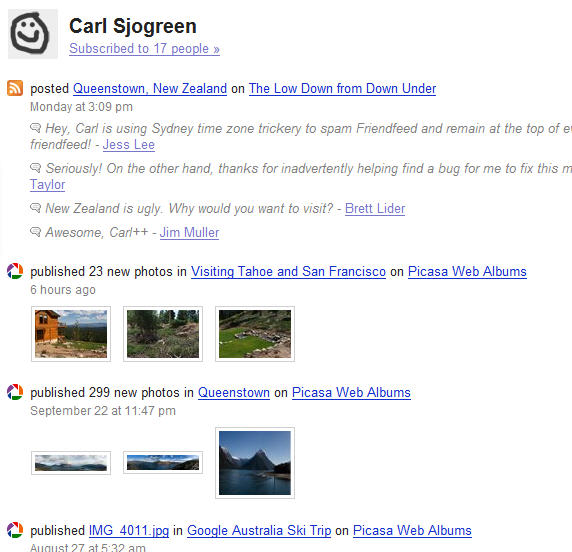