HubSpot, a startup that offers a free “website grader” to promote its marketing software, just received the venture equivalent of an “A” — namely, a $12 million second round of funding led by Matrix Partners.

The Cambridge, Mass. startup specializes in what it calls “inbound marketing” — in other words, it focuses less on trying to grab people’s attention wherever possible, and more about drawing people to a company’s website and then converting those visitors into paying customers. HubSpot offers a package of software-as-a-service tools that help smaller businesses (up to around 1,000 employees) figure out the best keywords, create landing pages and conversion forms and analyze their marketing data. 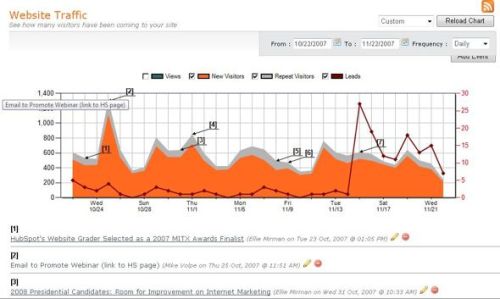 We’ve written about how crowded the web analytics field has become, and also about a company called Coremetrics that raised a whopping $60 million last month to combine analytics with other marketing tools. But HubSpot’s product is broader than that, and chief executive Brian Halligan says the company occupies a unique niche. To get the full range of services that HubSpot provides, companies would have to either hire another company to handle their marketing or cobble together an in-house solution by purchasing a landing page product, a search engine optimization product and so on.

Halligan and his co-founder Dharmesh Shah say they plan to spend most of the new funding on research and development to make HubSpot’s service even simpler and easier to use. They raised $5 million last July; existing investor General Catalyst also participated in the new round.

Halligan and Shah add that they’re really betting the company’s future on the quality of their product, and not just in the way that’s true for all software companies — HubSpot’s website is built and analyzed using the company’s software. Apparently it’s working, since the company’s customer base has doubled since the beginning of the year.

As I mentioned above, HubSpot also offers a free SEO product called the Website Grader. In case you’re wondering, VentureBeat scored a 90 percent, meaning that we’re better than 90 percent of the sites that HubSpot has graded. Shah assures me that’s a really good score, although I have to admit I was hoping for something even higher. I did feel a little better when I saw that HubSpot’s site didn’t manage to hit 100 percent either, falling a few points short at 96.3.