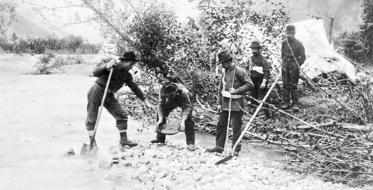 Like grizzled miners panning for gold on a river high in the Sierras, Facebook applications developers have been toiling away, trying to figure out how to make money from the millions of people who use their apps every day. Those developers who focus on games are starting to find gold — by which I mean revenue gained from doing things like selling virtual goods in exchange for real money.

Various estimates given to me by developers themselves and other sources peg some applications as making hundreds of thousands of dollars a month — this is money that a connected investor tells me Facebook itself isn’t even fully aware of. A few apps below are notably profitable, and these are self-funded small teams, not large, venture-backed companies. 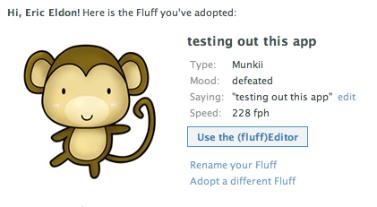 One of the first to really start hitting pay dirt, I hear from various developers, is (fluff)friends — a game reminiscent of the Japanese Tamagochi digital pets that you need to care for to prevent from virtually dying. In (fluff)friends, you choose a free virtual pet (or buy a fancier one) and display it on your profile page, let your friends pet it, feed it with virtual treats, enter it into virtual races, and adopt mini pets to keep it company — and a lot more, but you get the picture. You start caring about a cute virtual animal and all the things you can do with it, and pretty soon you whip out your credit card so you can buy it those virtual treats to make it grow virtually strong for the big virtual race. (This game is addicting for some personality types, but sadly not mine. See screenshot.)

The application has 112,229 daily active users now; note that this metric fluctuates based on time of day, week, month and season). Co-founder Mike Sego, a Google engineer currently on leave to focus on the application, isn’t giving me any revenue numbers, except to say that the app makes more than a dollar per month per daily active users. That means somewhere in the low six digits, at least. Also, a fraction of the app’s paying users, he says, are spending hundreds or even thousands on their pets.

Sego adds that all this talk of money-making virtual goods is “old news” to the Facebook application developer community. Indeed, other applications are also making these sorts of revenue figures, other sources tell me, including (lil) Green Patch (nurture virtual plants to help raise money to fight global warming; 745,630 daily active users) and Mob Wars (be a virtual mobster; 483,824 daily active users). 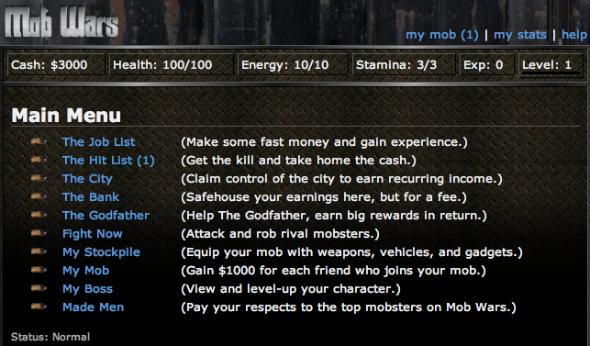 Specifically, one source tells me Mob Wars is projecting it will make $15 million in the next twelve months, although its developers haven’t gotten back to me to confirm. Another company, Friends For Sale! (buy and sell your friends, virtually; 656,396 daily active users) has told me that it doesn’t plan to make money on regular old banner ads, even though it recently raised a venture round. While it won’t tell me more, I’ve separately heard that it’s making money through its virtual friend-purchasing currency.

Friends for Sale — as well as (fluff)friends, (lil) Green Patch and other game-oriented apps — use the services of companies like Offerpal and Peanut Labs to reward users with virtual currency dollars in games in exchange for taking surveys. It’s a form of cost-per-acquisition advertising that builds into the notion of virtual worth.

Social Gaming Network (SGN) and Zynga are the two largest game-focused companies on Facebook, and both have virtual goods or currencies of some sort in place within various applications. SGN began talking about the potential of virtual goods last February, and it has been experimenting within various apps it owns — like the ability to buy a special, advanced character within its Jetman game (navigate a jetpack-equipped character through a cave; 38,962 daily active users). See the bottom of the following screenshot. You can buy Merky, a Jetman with special powers — for a dollar more. 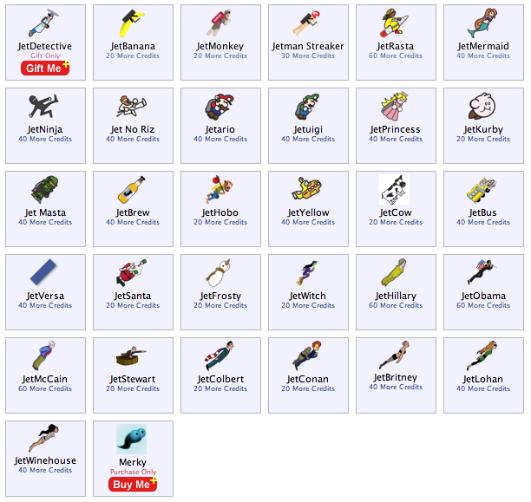 Zynga, which won’t tell me much, either, has been doing quite well with the virtual currency in its Texas Holdem Poker game (play poker; 623,353 daily active users), or so I’ve separately heard.

Another possibly good sign here is that both companies have recently gained some big-name backers, who are presumably getting a look at company revenue that’s hidden from me. SGN announced that it had brought on Amazon founder and chief executive Jeff Bezos as an investor, last week, which follows on a recent $15 million round. Meanwhile, Zynga has just raised $29 million in funding in a round led by Kleiner Perkins, with participation from existing investors Union Square Partners, Avalon Ventures, Foundry Group and Institutional Venture Partners, with IVP being the second largest investor, chief executive Mark Pincus tells me. He adds that his company has yet to tap into any of its venture money even though it has a staff of 80 people and other operating costs; it has been profitable through its previous $10 million round as well as this latest one, he says.

Zynga has also brought on Electronic Arts cofounder Bing Gordon in an operational role, and as a board member. Gordon had previously left EA and gone to work as a partner at Kleiner Perkins.

As part of the funding announcement, Zynga also purchased the YoVille application (a virtual world; 152,466 daily active users). It’s worth noting that SGN has also been buying up gaming applications, and so has all-purpose developer RockYou — Facebook’s platform is still a virtual land grab. It’s not just these two. Playfish, a smaller Facebook gaming application company with a few titles under its belt, like Who Has A Bigger Brain? (IQ quizzes; 330,345 daily active users), is also out looking for funding and talking to quite a few people.

Conclusion: Virtual goods are getting popular in more markets.

Virtual goods have up until now been the domain of Asian video games (where they’re mainstay revenue streams for many gaming companies, like Shanda), niche kids and teen virtual worlds like Habbo and Gaia Online, and hardcore computer games like World of Warcraft.

Facebook gaming applications — and presumably gaming apps on other social networking platforms — are giving developers greater access to more mainstream users. For example, (fluff)friends’ Sego says its paying users, mostly women, are spread evenly across countries where the application is popular, including the U.S., Canada, the U.K., and yes, Hong Kong and Singapore.

Us serious older types might not think that apps that entertain are worth much, but we need to start recognizing that entertaining apps, especially games, are as legitimate as any other form of entertainment business. And as Sego says, virtual goods are part of the entertainment that apps provide. So maybe instead of renting a movie or buying songs on iTunes, you pay $5 and get the (fluff)friend Golden Fox, then feed it.

This comes at a time when advertising on social networks continues to not monetize especially well. SGN and Zynga have both been experimenting with other forms of revenue, like targeted ads, and ad networks for other game applications they don’t own. I expect both companies, along with the two largest Facebook developers, Slide and RockYou, to increase their focus on how to integrate virtual goods into their applications, and maybe buy more companies (one developer tells me SGN, Slide and RockYou were all looking at buying (fluff)friends, although no deal has materialized, yet).

Meanwhile, Facebook is apparently not going to introduce its long-rumored payment system at its second annual developer conference tomorrow. Such a system could let Facebook take a cut of real money used to make virtual-goods purchases; in the meantime, Sego and others are using PayPal.