Cheap computers for the developing world are a cause celebre. And the cause is taking a big step forward today as Ncomputing announces that the Indian state of Andhra Pradesh will adopt Ncomputing’s $70 thin-client machines for its government-run schools.

The state has 1.8 million school children and has agreed to buy Ncomputing machines for more than 5,000 schools.

The Redwood City, Calif.-based company is making good headway with its machines, which are connected via Ethernet cables to a central desktop that functions like a server. With virtualization hardware, the server allows each client to run a full suite of Windows or Linux applications.

The thin clients themselves don’t have any CPU or main memory chips, so they’re much cheaper than standard PCs but offer much the same functionality. (The $70 cost does not include mouse, keyboard or monitor). 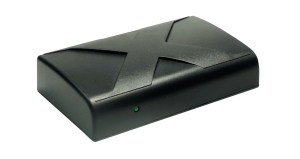 The Indian deal will include the purchase of 50,000 clients in the coming months, making it the biggest deal for NComputing in India. The total value of the agreement is $80 million, but that amount is shared by all of the hardware and software partners involved.

The government will save an estimated $20 million in costs compared to a traditional PC solution and cut its electricty costs by 90 percent, said Jim Jones, a board member of NComputing and partner at venture firm Scale Ventures, which led the company’s first-round funding.

The technology is based on the insight that today’s PCs are so powerful that the vast majority of applications only use a small fraction of the computer’s capacity. NComputing creates multiple virtual desktops on a single PC — effectively slicing up a machine’s computing power — so that many users can tap the unused capacity. Up to seven users can simultaneously share one Windows-based computer for the version of NComputing’s product line-up that Andhra Pradesh is adopting. Other versions of the NComputing product can connect up to 31 thin clients to a desktop. The thin clients use about a watt of power, compared to 85 watts for a typical computer. 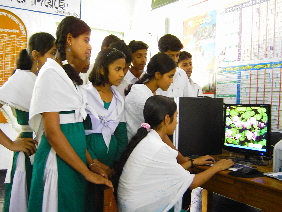 So far, the company has more than 20,000 customers in 90 countries, including 4,000 school districts in the U.S. NComputing has shipped more than a million units overall, with 180,000 in schools in Macedonia. That’s more than One Laptop Per Child, the cheap Linux-based laptop from the team headed by former MIT Media Lab creator Nicholas Negroponte. NComputing also competes with Intel’s Classmate PC and Asus’ eePC. On the thin-client side, the company competes with Wyse and Hewlett-Packard’s Neoware.

Ncomputing was founded in 2004 by a team in Germany and South Korea. Stephen Dukker, the former chief executive of PC maker eMachines (bought by Gateway), is the CEO. Besides the $8 million first round led by Scale Ventures, the company also raised $28 million in a second round led by Menlo Ventures earlier this year. It has 160 employees. Jones said that the company’s financial performance is strong and that it is not raising a new round of funding now. Here’s a link to a video description and a green computing white paper.