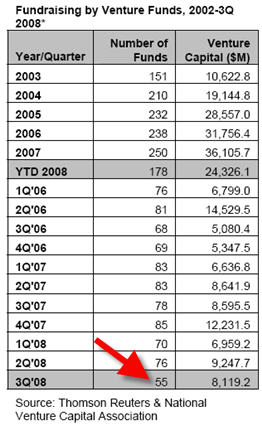 A shakeout in the venture capital industry appeared to take hold in the third quarter of the year, even before the latest decline in the stock market began. And we’ve also learned one more reason why Sequoia Capital may have reacted as quickly as it did with its terrifying R.I.P. message to companies: Sequoia raised more money than any other venture firm in the third quarter.

This gives it an unexpectedly large war chest to invest in a risky economy, but it also means its partners may have less time to focus on existing companies (Sequoia had been hiring more partners to focus on the public markets lately, and so it’s possible that Sequoia may have enough partners to help it invest wisely; Sequoia has steadfastly declined comment on its plans). But Sequoia also has limited money to invest in existing companies, because money from new funds can’t be invested in old companies, according to standard fund agreements with its investors.

First, a look at the quarter totals: Only 55 venture capital firms raised money for fresh funds, compared to 78 firms that raised money in the same quarter a year ago. It is the lowest number for at least two years, according to data provided today by Thomson Reuters and the National Venture Capital Association.

The total amount raised was $8.1 billion, compared $8.6 billion a year ago. That amount isn’t markedly lower than in previous quarters, in part because the firms that do raise money tend are raising more than they did before.

Sequoia raised the most during the quarter with its “US Growth Fund IV,” which totaled $925 million, according to the Thomson Reuters/NVCA survey. The fund will invest in mature companies, that is those that are expanding more quickly than the typical seed-stage startup working on an idea. That’s why the fund is called “growth.” Other firms raising large funds were Austin Ventures ($900 million for its tenth fund) and InterWest Partners ($650 million, also that firm’s tenth fund).

With so much fresh cash on its hands amid an economic downturn, Sequoia’s partners may find it difficult to know where to invest it wisely. Usually, a firm agrees with investors that it won’t invest money into companies it has already backed with a previous fund (because the investors in the new fund don’t to pump good money after bad; they want Sequoia to avoid such conflicts with its previous funds), so Sequoia will need to find new companies. But with the economy slowing, valuations for companies will come down, meaning Sequoia won’t have to invest as much per deal — giving it excess money on its hands, and thus potentially lowering returns because it can’t be spent as efficiently. Or at least that is the theory.

But on the good side, at least the downturn hit before Sequoia had invested much of the money; this way Sequoia won’t get left high and dry like it did last time when it invested a large growth fund right at the top of the last bubble. But it’s probably one more reason why Sequoia reacted so quickly to the crisis with advice for the companies it has already backed: Basically, any funding its scores of existing companies (Loopt, Rockyou, Admob, among them) are going to get from Sequoia will come from reserves Sequoia has allotted from previous funds, which are limited.

While the venture capital industry’s fundraising levels may be impacted by the financial crisis from the past few weeks, that impact will be felt in the future. This lower fundraising volume of the third quarter does not reflect this latest downturn. As of Sept. 30, when the third quarter closed, there were already fewer firms in fundraising mode and much of the Wall Street volatility had yet to occur, according to Thomson/NVCA. The study concluded:

…Fundraising could be impacted longer term should the percentage allocations of large institutional investors shrink due to lower fund levels resulting from losses. However, this scenario will take some time to take hold, if it does so at all. 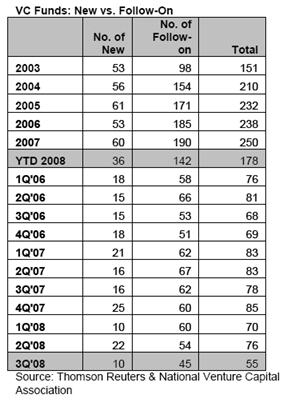