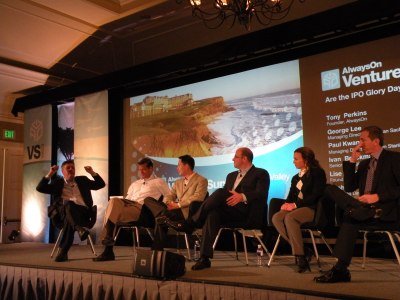 About 500 people converged this week on the AlwaysOn Venture Summit West at the luxurious Ritz Carlton hotel in Half Moon Bay, Calif. Apparently shell-shocked investors, venture capitalists and entrepreneurs still want to commiserate and await the upturn in a group setting.

The conference itself is a kind of barometer for the economic downturn and what its impact will be for Silicon Valley. After sitting through the survivor tales for a day and a half, I will share my impressions of where things stand in what we might later call the Cosmic Collapse of 2008. (Sounds worse than the Great Depression, right?)

Messages about how to survive in the downturn are becoming familiar homilies. At AlwaysOn, I heard the same ones over and over: Innovation lives on. Companies need to batten down the hatches Sequoia Capital style, but they should spend what it takes to innovate their way out of the storm. Be capital efficient. Focus on what you do best and cut out the rest. And (my personal favorite from angel investor Ron Conway) if your company doesn’t have a year of cash in the bank, you’re in the intensive care unit.

“This economic drought is going to last at least a year,” Conway said. “If you don’t have a year of cash, you might as well shut down.”

Opinions differed on how long the slump will last, ranging from predictions of a recovery in the third quarter of 2009 to bleaker assessments of a three-to-four-year downturn, said Tony Perkins, head of AlwaysOn and organizer of the conference. Valuations of startups have been slashed, and venture capitalists have engaged in portfolio triage. But there are clear bright spots, like cleantech firms, he said. 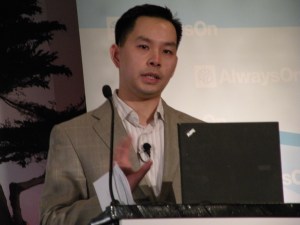 Paul Kwan, managing director at Morgan Stanley, delivered the bad news in an opening talk on Tuesday. He said that the S&P 500 gained $3.5 trillion in the six years that ended October 2008, but that the index has lost $2.5 trillion in value since October. He rattled off a lot of bleak stats — initial public offerings are down 94 percent in 2008, for one — but he said that liquidity has been returning to the credit markets in the past few days.

He believes that ad spending will not crater entirely. Rather, it will follow the pattern of the gross domestic product, recovering as GDP does. He thinks signs of recovery will be evident in two or three quarters. On the bright side, Kwan ticked off a bunch of reasons for optimism, including the fact that digital consumer internet traffic is expected to surpass business internet traffic for the first time in 2008.

Moreover, he said investors can find gems by paying attention to alternative metrics, aside from profitability, that are associated with high-growth companies. As an example, he said that companies can calculate the lifetime value of a customer. That number will show early on why it’s justified to spend more money acquiring customers than they generate in revenue.

Jeff Matthews, a partner at RAM Partners, said that it will probably take a high-profile IPO to bring confidence back to the tech sector, much like Google’s 2004 IPO brought back optimism to Silicon Valley after the “nuclear winter.”

While IPOs are down, there are still a lot of companies that have filed registrations for going public and are awaiting a better stock market. That means that there are a lot of healthy private companies out there that may be looking to go public in 2009 or 2010, said Lise Buyer, founder of the Class V Group.

“We shouldn’t underestimate what a huge disaster the economy is,” she said. “But the only way to get out of a disaster is to innovate.”

Sequoia Capital’s warning to its portfolio companies was a common point of discussion. Buyer said that the presentation was meant to scare companies into contemplating what is next for them if they cannot secure another round of funding.

Ivan Brockman, senior managing director at private equity firm Blackstone Group, said, “The 2001 bubble era was about growth at any cost, not growth balanced with cost. That was the point of the Sequoia presentation and it has gotten across.”

Josh Tanzig, managing director at Revolution Partners, said that early-stage companies are raising $2 to $4 million extra now out of concern that the next round might not come so easily. Angel investor Jeff Clavier said that he believes that companies can stay in business longer on a shoestring budget because it’s cheaper to operate internet companies, at least in comparison to the 2001 downturn. Conway said that the deals coming to him are still high-caliber, and his pace of investment is the same.

Corporate venture investors such as Microsoft, Google and IBM said they have been buying or investing in a company a month, and that they expect they will continue to do so through the downturn.

While big corporate investors have the upper hand in valuation assessments now, they aren’t being so hard-nosed as to wait for startups to go bankrupt before making a bid. David Lawee, vice president of corporate development at Google, said the key talent the big company wants to acquire would walk out the door before the transaction closed. While valuations have dropped, making it hard for two sides to come to agreement, Lawee said that the best companies still command high prices. 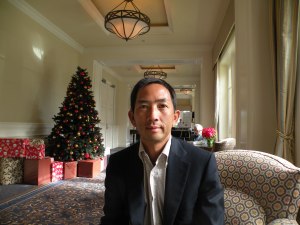 Peter Nieh, a partner at Lightspeed Venture Partners (who has his own blog predictions about cleantech today), said that cleantech is a bright spot, but investments will slow in 2009, forcing startups to find creative financing.

He said cleantech is often capital intensive and that small companies should think about doing joint ventures with big ones to defray the capital costs. He also held out hope that the Obama administration may set up a venture-like arm of the federal government to invest in the cleantech research that is harder for private companies to back.

Cleantech is likely to catch on first in emerging markets, not mature markets, for the same reason that cell phones took off faster overseas: everyone in developed countries had land lines, so it was easier for the emerging markets to adopt new technologies like cell phones. Similarly, countries that are building new structures or entire cities are likely to build them with more energy-efficient technologies. And Nieh thinks that investments in over-funded areas like solar cells will lead to more investment in fresh areas like energy storage.

Steve Jurvetson, managing director at Draper Fisher Jurvetson said that his own cleantech investments aren’t dependent on oil prices staying high. So even though they have fallen, he said he is optimistic that the combination of genetic engineering and cleantech concepts will result in plants that take fewer resources to cultivate and thus won’t consume as much energy in production.

Among the pitches that resonated was one from oDesk, a Menlo Park, Calif.-based company that creates a marketplace for online work teams. Its web site enables companies to hire freelance talent on demand, manage them, watch exactly how much work they do, and then pay them accordingly.

Gary Swart, chief executive of oDesk, said the company eats its own dog food. It has 23 employees, but much of the work is also done by 43 contractors around the world who cost less than $800,000 a year. The site has 15,000 customers and there are 46,000 jobs listed right now.