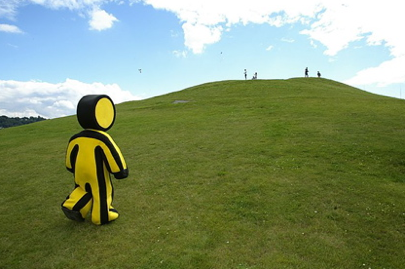 As part of Tim Armstrong’s big turnaround plan for AOL, the online media conglomerate he recently became chief executive of, he’s buying two local-focused startups. One is Going, an events organizing site, another is Patch, a local news site.

Armstrong left a senior advertising spot at Google earlier this year, in a bid to restore AOL to the position of market dominance it held earlier this decade. Each acquisition was for around $10 million, according to Kara Swisher. Armstrong, notably, was an investor in Patch (he says he’s not making money on the deal).

Here’s why he thinks local is a good direction for the company to grow:

Local remains the largest white space and offers us an ability to improve the lives of many consumers. It’s a space that’s prime for innovation and an area where we already have strength with a local network that reaches more than 54 million [unique visitors] a month and a valuable brand in mapping services, MapQuest.

Sounds plausible. AOL, for all the maligning it gets in the media, still has millions of users. And, personally speaking, I’ve been surprised by how slick some of its recent efforts have come out looking, like its new SocialThing sharing toolbar, currently being rolled out on its large property of web sites.

Will Armstrong, AOL, and these startups be able to make more coherent products out of the parts they have now? That remains to be seen.