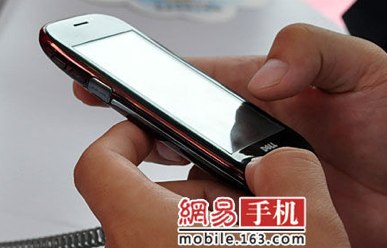 Dell’s smartphone Mini 3i made its first appearance today in China at an event held by China Mobile, the large Chinese wireless carrier, which will distribute the phone.

Dell’s Mini 3i is one of a series of phones China Mobile is launching based on its OMS operating system, which uses Google’s Android operating system as its foundation. The move by China Mobile to base its phones on Android is a blow to Apple, which had sought for years to do a deal with the carrier.

Notably, the Mini 3i doesn’t support Wi-Fi or the Chinese standard WAPI. The phone has a 3 megapixel camera.
It is a 3.5-inch, 360 x 640 pixel device, and has a capacitive touchscreen. The device operates on 2G GSM (not 3G) and comes with microSD slot, Bluetooth, and 950mAh battery.

China Mobile rules China with more than a 70 percent market share, which helps guarantee distribution in what can be a tough market for foreigners to penetrate. Chinese consumers aren’t used to buying directly from the Web, and they’re not used to using credit cards — something that has hurt Dell’s PC sales growth in the country (Lenovo did much better with its wide distribution in stores). It appears Dell learned its lesson.

Dell’s new China phone made its appearance at an event to celebrate the opening of China Mobile’s application store, Mobile Market, which will support music, video, and app downloads to mobile phones from Dell, as well as from Nokia, Samsung and LG (Update: We reached out to China Mobile and it turns out that the report on the Mobile Market is wrong. Said a representative: “China Mobile has not officially announced Mobile Market and its plan yet, so we can not release related info to the public now.”).  No word on exactly when the Dell phone will ship, though.