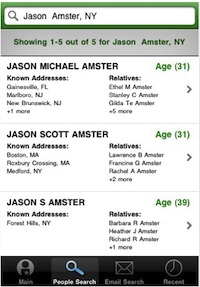 Background checks are simultaneously one of the coolest and one of creepiest things you can do on your iPhone. Intelius made a splash at the most recent DEMO conference (co-produced by VentureBeat) with its DateCheck app, but users have to pay anywhere from $10 to $200 for each background check.

BeenVerified, on the other hand, released an app a few days ago providing three free checks per week. It sounds like iPhone owners are getting plenty of use out of that offer.

Since BeenVerified released its app on Dec. 18, the company says it has been downloaded and opened 54,423 times. It’s ranked 50 on the iTunes list of most popular free apps, and seems to be gaining steam, with 18,203 downloads yesterday, compared to 7,084 the day before. Those users have performed 110,829 background checks so far. (BeenVerified sent me those numbers at around 1:30 Pacific time today.)

The New York company’s data includes criminal records, property records, social network accounts, and more. You can check one of your iPhone contacts with just a click. But if you want more than three checks a week, you have to upgrade to BeenVerified’s premium service, which costs $8 per month.

BeenVerified launched its web-based background checks in September 2008. It has raised $800,000 in funding. Get the app here.