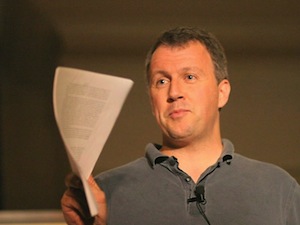 Y Combinator cofounder Paul Graham today offered an overview of how he has seen the angel and startup world evolve in the last year. Among other trends, he argued that the traditionally structured venture round is becoming irrelevant.

Speaking at AngelConf today, the angel investing event hosted at Y Combinator’s office in Mountain View, Calif., Graham compared the traditional venture model to the classic children’s book Are You My Mother? Startup entrepreneurs raising funding are like baby birds, asking every venture capitalist, “Are you my lead investor?”

Now, however, more venture rounds aren’t being led by a single investor, and they don’t have an official close date or amount, Graham said. There may be an official lead, but that’s in name only, and they don’t dominate the process like they used to. This benefits the startups because the lead investor has less power to screw them over. Even if the investor is well-intentioned, the startup isn’t held back if the lead isn’t moving fast enough to raise money. And rather than distracting itself with intense fundraising, a startup can keep raising money in the background as needed.

Graham said this is part of a larger trend where founders have more power than investors, a trend that incubator Y Combinator “has been based on since the beginning.” Entrepreneurs who have had difficult dealings with VCs may be skeptical that this power shift is really happening. Even Graham acknowledged that the fundraising model he described isn’t happening for every startup. But that’s how the best ones are raising money.

“If the best startups are doing this, what do you care what the other ones are doing?” he said.

You can read about angel investor Ron Conway and blogger Michael Arrington’s remarks at the angel event here.