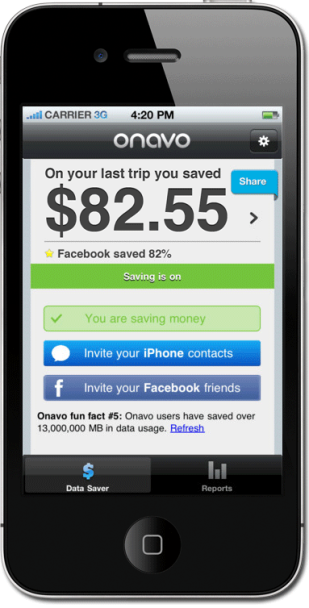 Onavo, a company known for its iPhone app that shrinks mobile data, announced today that it has raised an additional $10 million in a second round of funding from Horizons Ventures and Motorola Mobility Ventures.

Guy Rosen, Onavo’s co-founder and CEO, told VentureBeat the  funding is an “excellent validation” of the company’s work. The company has won several awards and accolades for its seamless data compression technology (including top prize at our MobileBeat 2011 conference) after launching on the iPhone in April 2011.

“The coming year is about pushing that forward, taking it to the next level,” Rosen said.

One big task the company still needs to tackle is making its mobile apps comparable in functionality. The Onavo Android app doesn’t offer data compression but does feature slick ways to track which apps are using data. It also has a crowdsourced engine that tracks app data hogs. Meanwhile, the iPhone app doesn’t yet have access to the crowdsourced engine, even though it can compress mobile data.

Rosen tells me the company wanted to focus on the initial problems each mobile platform faced. On Android, it’s easy for apps to run in the background and eat up data, so it made more sense for Onavo to release a tool to help keep that under control. On the iPhone, background data usage is less of a concern, so the company focused on compressing overall data usage.

Of the awards Onavo has earned so far, Rosen tells me his favorite was the “Grandmothers Award” from last year’s International Startup Festival in Montreal. Onavo was chosen as the most innovative app by a group of technology-agnostic older women, which is a clear indication that the company’s value is easily recognizable.

Onavo is based in Tel Aviv, Israel, and with today’s funding has now raised a total of $13 million. Horizon’s Jason Wong will be joining Onavo’s board as part of the round.