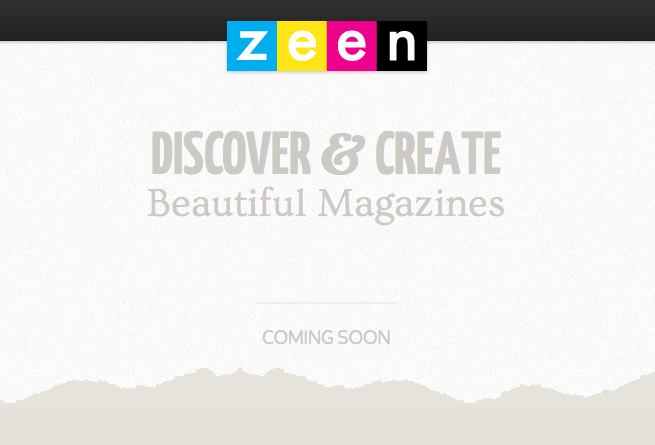 Most people who see a $1.65 billion exit of their company would be content to retire from the business world, but that’s rarely the case in the tech industry, as YouTube co-founder Chad Hurley demonstrates.

Hurley is scheduled to launch a new service called Zeen next week that creates digital magazines and publications, according to TheNextWeb. He made the announcement at the Le Web 2012 London event today, but remained mum on details of the new service.

What we do know is that Zeen will launch under Hurley and fellow YouTube co-founder Steve Chen’s company AVOS. Hurley’s plans for Zeen were first unearthed by Fusible back in April after the site discovered that the YouTube founder had purchased the Zeen.com domain.

Visiting the site today also doesn’t provide much additional information. Visitors are met with a Zeen splash page and are asked to pre-register for the service to secure their preferred user name. Presumably, the service will notify you when it does launch, which according to Hurley, will be very soon.

It’s hard to say whether Zeen will have much impact on the world of digital magazines, which is quickly becoming a crowded space. It’s likely to face competition from the likes of Flipbook, Pulse, Google Currents, Editions by AOL, and CNN-owned Zite.

It’s also worth noting that Hurley’s last venture didn’t exactly have smooth sailing, either. AVOS purchased iconic bookmarking site Delicious just over a year ago and unveiled a relaunched version back in September that wasn’t well received by long-time users. That said, it’s usually difficult to reinvent a social network/sharing site once it’s past its prime. (Digg, Myspace, Newsvine, and many others can attest to this.)

With Zeen, Hurley and crew are starting something fresh. And with mobile consumption of media only increasing, there’s still plenty of room for innovation when it comes to digital magazines.