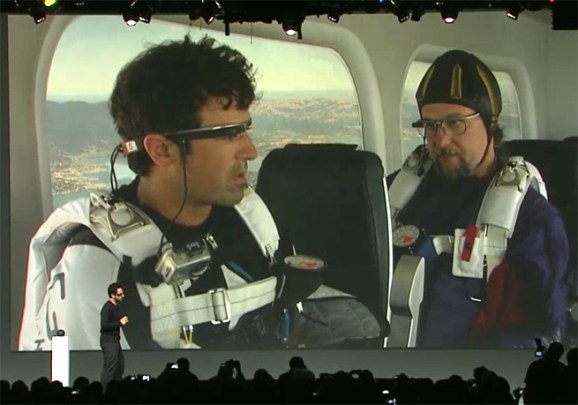 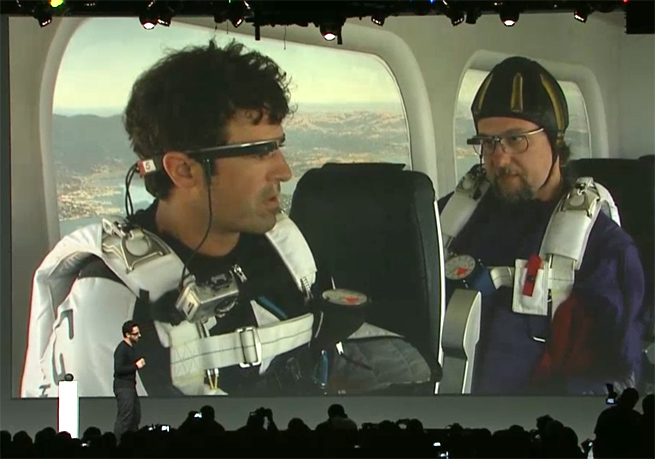 For those who haven’t been keeping track, Project Glass’ sci-fi-looking glasses allow a person to do many of the things you do with your smartphone, except without the need of a separate device. Instead, you just wear these slightly dorky-looking glasses that have a heads-up display and a camera built in. In this case, the demo showed that real-time connectivity from someone else’s point of view can help create a breathtaking experience for others.

“We have something special for you,” Brin told the audience. “It’s a little time sensitive. This could go wrong in about 500 ways. Who wants to see a demo of Glass?”

The company then showed off how cool it is to share a real-time experience with others by showing a skydive in real-time. We actually saw the team of skydivers flying down over San Francisco and heading to the Moscone Center where the Google I/O conference is happening. On the screen we were able to see other views as well in a Gooogle+-hangout-like format.

After the skydive, the perspective switched to the team rapelling down Moscone Center and into the building. Pretty crazy all around. (We will post a video of this when it is released.)

When the stunt finished (and our hearts stopped beating), Google spilled new details on Project Glass. The team started working on Glass two and a half years ago. They said the believe in the idea of a companion camera that will always help capture your experiences and make them simpler to share.

Brin said there were three reasons the company wanted to show off what was going on with Glass.

“First, we find it incredibly compelling,” Brin said. “Second is that it’s something we can show you, because you can’t experience it. And third, we’re a pretty small team, and we’ve only had so much time to try functionality.”

Finally, Brin announced that U.S. developers attending the I/O conference could pre-order “Glass Explorer Edition,” an early build of Glass. It will cost $1,500 and will be shipped “early next year.”

Here’s a clip reel from today’s presentation. We will add the real presentation video if Google chooses to release it.

And there’s also a decent video shot before today’s presentation of Google Glass mixed with skydiving below: