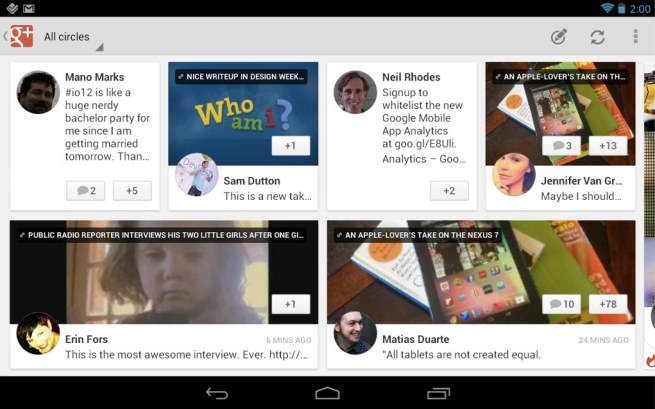 Google released a tablet version of its mobile application for the Google+ social network at its Google I/O developer conference. And even though Vic Gundotra’s Google+ presentation was the least exciting and most interruptible portion of the keynote, the tablet application, available for Android and soon for iPad, knocked my socks off.

I couldn’t help but think: This is how a current social network should look on a touch-screen device. So beautiful, so alive with color, so fluid, and so dynamic in its visual delivery of stories is Google+ in tablet form, that the app makes Facebook’s mobile applications look as if they were built in the MySpace era.

Specifically, I love the look of the stream, which now styles content based on popularity (+1s and comments), type (photos, videos, URLs), and the orientation of your device (I’m partial to the landscape view). The tablet app is even more bold and beautiful in design than the recently released iPhone app. The only thing missing? People.

I wasn’t the only one who thought so. In chatting with Altimeter Group mobile analyst Chris Silva about the application, I discovered that he too found Google to be more avant garde than Facebook in an area that Facebook should know best.

“[The app] definitely shows the prowess that Google has over Facebook in terms of mobile design and in creating a captivating mobile experience,” Silva said.

“Facebook … has a potentially, comparatively better arsenal of mobile development talent on board,” he added. “Here’s Google doing all this great development work on mobile with largely internal talent, and Facebook that’s gone out and spent a billion dollars on Instagram, made all these other acquisitions … and still hasn’t yet created that experience that makes me say, ‘wow.'”

As any Facebook user knows, the mobile experience is quite slow, clunky, and choppy when it works. Sometimes the app is barely functional at all.

It certainly makes sense for Google to invest in building a great mobile experience. Not only is the entire world trading in the web for mobile, but Google+ is itself a social network that sees more mobile engagement than it does desktop engagement.

“We now have more users engaging with Google+ from mobile than desktop. That’s a significant situation, and we take it seriously,” Gundotra said on stage during the keynote.

But here’s the caveat: Silva thinks the app, even in all its glory, boils down to just a bright, shiny object. That means Google+ poses no immediate threat to Facebook.

“Right now, there’s still no reason [for Google+] to displace Facebook as the social network of record,” Silva said.

So while Google can claim that G+ has 150 million monthly active users and that active users are spending 12 minutes per day in the stream, Silva remains underwhelmed.

“[Google+ users] can be engaged for two, three, four, five hours a day. They’re still a small segment of the social networking population. I don’t see anything that’s compelling enough to change how big that slice of pie is for Google.”

But make no mistake, mobile is Facebook Achilles’ heel, and it certainly doesn’t look good for the newly public company to lose to Google in a mobile face-off.