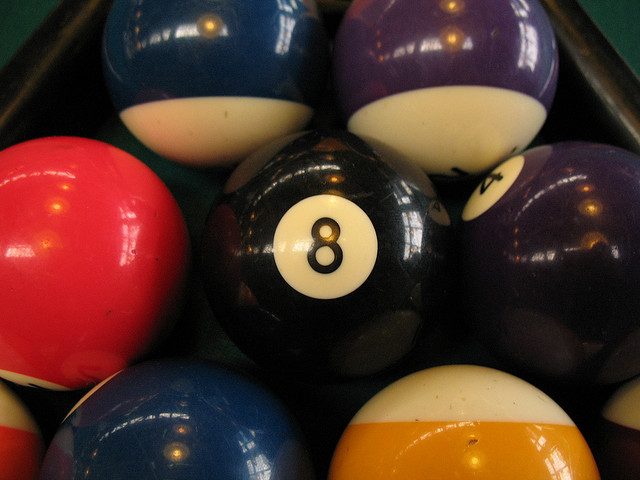 It’s 8/8 today, and I have eight funding announcements. Coincidence? I think not. Now if only one of them had raised $8 million dollars, we would really have a coincidence on our hands. Regardless, I fully intend to spend the rest of the day playing pool, consulting my magic 8-ball, and playing Crazy Eights.

Realtime launched in the U.S. today and announced a $100 million investment to help the world transition from the static web to the live web.

Based in Brazil, Realtime has developed technology that enables the Internet to update instantaneously and continuously. Rather than a request-and-response protocol, Realtime is powered by Open Real Time Connectivity. With ORTC,  applications can update directly from the server to the connected user without manually refreshing the page.

The São Paulo-based BRZTech Holding led this round of funding. Read more on VentureBeat.

The time is ripe for network virtualization startup Plumgrid, which has harvested $10.7 million in its first round of funding. Exactly what Plumgrid does remains uncertain, much like the contents of a pie hidden under a layer of crispy crust, but the product promises to come out of the oven hot.

Based on the aroma coming out of the metaphorical kitchen, it seems the company is trying to improve software-defined networking. The funding round was led by U.S. Venture Partners and Hummer Winblad Venture Partners. In 2011, the company got $2.05 million in stealth funds from USVP. Read more on VentureBeat.

Starbucks goes Square (not the cup shape, but the payment system)

Mobile payment startup Square has announced an extensive partnership with Starbucks. Among the terms of the partnership, Square will power Starbucks’ credit and debit card payments nationwide, and Starbucks will invest $25 million in the startup as part of its fourth round of funding.

Square has raised $141 million so far and is rumored to be working on a massive $200 million round, which would value it at $3.25 billion. Read more on VentureBeat.

Inneractive offers a real-time bidding platform and private ad exchanges, which enables advertisers to vary their purchasing and pricing in real-time, while private ad exchanges allow developer communities to offer their own white-label advertising solutions. Inneractive consolidates over 120 ad providers that offer ads in 200 countries and can be integrated into apps via one line of code.

With this latest injection, Inneractive plans to expand globally and open offices in New York, India, and Singapore, in addition to the ones in existing offices London, Tel Aviv and Silicon Valley. Read more on VentureBeat.

With AwesomenessTV, will online video kill the TV star?

AwesomenessTV is so awesome that they snagged $3.5 million in a first round of investment. The YouTube channel broadcasts original video content for teens and tweens. The programming consists of comedy, fashion, sports, music, and reality programming.

This round of funding was led by MK Capital, a firm with a strong portfolio of digital media companies. Greycroft Venture Partners and New World Ventures, as well as a slew of media and technology executives, also participated. Read more on VentureBeat.

Garantia Data has raised a $3 million seed round today from angel investors and was named part of the Amazon Web Services Partner Network. The company launched a beta version of its cloud-hosted database management system (fully automated in-memory NoSQL cloud service for you technical folks) at GigaOm’s Structure LaunchPad in June. It strives to “completely free developers from dealing with nodes, clusters, scaling, data-persistence configuration and failure recovery, while  guaranteeing absolutely no data loss.” Read the full press release.

Influitive’s marketing platform AdvocateHub helps business-to-business software companies capitalize on their most fervent supporters. The portal gamifies the consumer advocacy experience by posing challenges and offering rewards. It allows businesses to attract, organize and motivate advocates, as well as add higher levels of fun and effectiveness into advocate-based marketing campaigns.

With $1 million, MarketMeSuite abandons its homeland and sails toward Plymouth Rock

MarketMeSuite, an end-to-end social media marketing platform for small and medium businesses (SMBs), announced it has secured a $1.1 million funding round from Boston-based VC Jeff McCormick of Saturn Partners. The company helps more than 30,000 users engage, manage, curate, and measure their social media activity and turn them into qualified sales leads. It has relocated from the U.K. to Cambridge, MA to be closer to its investor. Fortunately, the team won’t have to give up baked beans, a food product both Bostonites and Brits alike seem to have an affinity for.