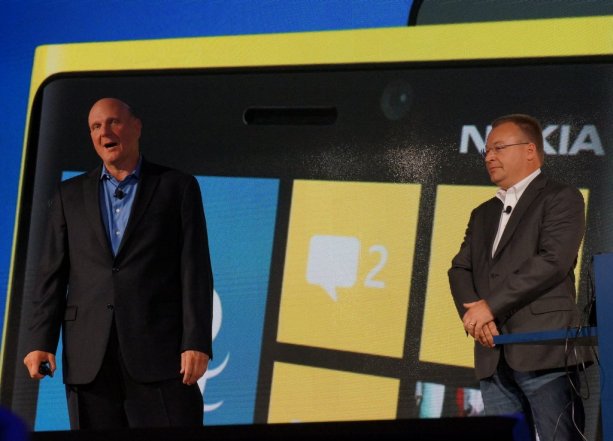 Four hundred million. That’s how many Windows 8 and Windows Phone 8 devices Microsoft chief executive Steve Ballmer expects to be in the wild by this time next year.

It’s not unusual for Microsoft’s CEO to make bold statements, but his comments yesterday at Nokia’s Windows Phone 8 press event got me thinking. With Windows Phone 8, Microsoft is stepping into the third year of its mobile platform, and I’ve been wondering exactly how the company can turn things around after struggling with sales so far.

Ballmer’s grand proclamation made Microsoft’s Windows Phone strategy clearer than ever: It’s all about the Windows 8-powered ecosystem now. Since Windows Phone 8 runs Windows 8’s kernel, it’ll be easier than ever for developers to port apps between desktop, tablet, and smartphone.

“Perhaps more importantly than anything else, we bring a developer platform and a store that’s common to both Windows 8 and Windows Phone 8,” Ballmer said.

“That means Lumia … that means Surface … devices introduced in Berlin last week … those devices I’m quite sure represent the largest single opportunity for developers today,” he added. “I’m betting right now the next app developer to hit it really really big will be on Windows.”

No other company can offer such a cohesive ecosystem across the desktop and mobile devices — not even Apple. iOS and Mac OSX, though they’re quickly beginning to resemble each other, are still very different when it comes to actually building apps. And Google can barely make the Android ecosystem enticing for mobile developers who actually want to make money (let’s not even get into the desktop side of things).

Windows 8 isn’t just Microsoft’s radical stab at tablets, it’s also what will finally lift up and truly differentiate Windows Phone for the upcoming year. That’s important, because the platform has suffered from being only slightly more convenient and prettier than its competitors. If Microsoft can market Windows Phone 8 as an extension of Windows 8, it could finally make consumers pay attention.

As much as we liked Windows Phone from the beginning, the platform has so far fallen flat with consumers. Even though Windows Phone has failed to make much of a dent against the iPhone and Android’s market share, Microsoft still has plenty of potential to tempt dumbphone owners.

When Windows Phone 7 launched in late 2010, I admired its unique style, even though its array of launch phones felt like slightly outdated Android handsets. Come late 2011, Nokia announced its first set of Lumia Windows Phones, though they were only available internationally (and notably, no other new Windows Phone handsets were available to excite consumers at that point). By the time the Lumia 900 eventually hit the U.S. in April, many potential Windows Phone buyers were likely tempted away by the iPhone 4S or the multitude of high-end Android smartphones.

Now it seems the pieces are finally coming together for Windows Phone. Nokia’s upcoming Lumia 920 smartphone looks and feels like something truly special, and its Pureview camera technology is far beyond what other phone manufacturers offer. Once Windows 8 lands on October 26, I wouldn’t be surprised to see developers flocking to build apps, which will in turn make them take a second look at Windows Phone.

And perhaps most importantly for Windows Phone, it will no longer feel like an outlier among Microsoft’s products. Windows 8 finally wraps up everything Microsoft is doing —  desktops, smartphones, tablets, and even the Xbox’s new interface — into one cohesive computing experience.