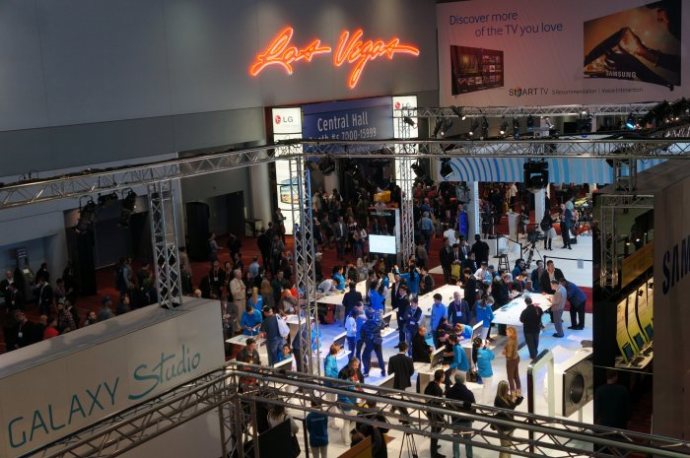 You’ve seen what we loved at CES last week, as well as some of the weirdest news out of the event. Now here’s a choice selection of the very worst of CES 2013.

The impracticality of the Ascend Mate trumps the slight convenience of a bigger screen: It’s too big to fit in most pockets, almost impossible to use one-handed, and it looks completely ridiculous when you actually try to use it as a phone. There’s a point where we have to say “no more!” when it comes to increasingly larger smartphones, and I believe the Huawei Ascend Mate is it. — Devindra Hardawar

The big players hold back

This was a surprisingly weak year for major device announcements from big companies like Microsoft and Sony. Most companies now hold their own events for smartphone and tablet launches, since it allows them to control the news, instead of fighting for attention at CES. Many are also waiting until Mobile World Congress next month to show off their new mobile gadgets. It could be that we’re also seeing a drought of new devices after the tablet and smartphone gold rush of the past few years.

Whatever the reason, the door seems wide open for smaller companies to make a splash at CES in the future. Just look how much of an impact Nvidia and Qualcomm were able to make at the show. — Devindra Hardawar

Sony and Microsoft had nothing to say on the console front, as they’re waiting for E3 in June to make a splash with the game audience. On top of that, Microsoft had very little to say about where the Windows 8 ecosystem is going after its underwhelming launch in the fall. This foot-dragging by industry leaders is giving opportunity to startups and usurpers. But those companies won’t have the muscle to push aside their rivals. For consumers, that means they’ll have to wait longer for innovation. — Dean Takahashi 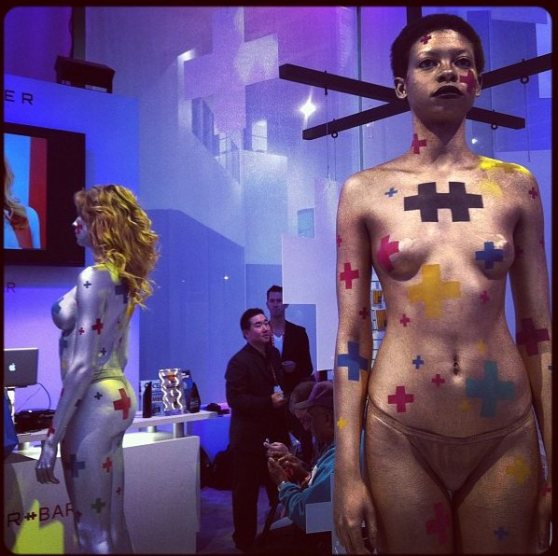 Above: Hyper Drive proudly posted pics of its booth babes on Instagram.

It’s 2013 and we’re still dealing with companies showing off scantily clad ladies to hype their wares. You could say it’s just Vegas, but of course that would be a lie. “Booth babes” are a staple of pretty much every major tradeshow, especially when they involve tech like games and cars. But it seems more than a little anachronistic today when we’re having serious and important discussions about gender equality in the tech industry.

The storage company Hyper Drive was one of the worst offenders. Its booth featured women wearing practically nothing except underwear and body paint, with all the agency of a statue. Sexual objectification ahoy!

Just look at the storm VentureBeat’s Jolie O’Dell whipped up when she (rightly) lambasted a sexist CES ad campaign. That post ended up sparking the #notbuyingit hashtag, which sadly applied to quite a few companies at CES. — Devindra Hardawar

4K Ultra HD TVs were introduced by nearly every major consumer electronics vendor at the show. But the innovations were all too similar. Each vendor had similar (huge) screen sizes, since they source their screens from many of the same vendors. Nobody spoke about price tags, but $10,000 for a 55-inch 4K screen sounds like a typical figure.

The big problem is that the 4K ecosystem is very weak. Hollywood-style support in the form of movies is going to be slow in coming. That lack of content support is similar to the debacle around 3D TVs and the 3D glasses needed to watch them, when consumer electronics manufacturers tried to push a technology that consumers didn’t want. There isn’t a great way to get 4K video content into the home and distributed around the house. 4K looks better than the usual HDTV, for sure, but the manufacturers better bring down the prices and make the systems more useful and differentiated. — Dean Takahashi

As a movie lover, I’m enamored with the idea of getting an even bigger TV with a crazy-high resolution. But Dean’s point still stands — right now we’re just seeing nice TVs, not the content ecosystem to support it. There’s no new disc-based format on the horizon to support huge 4K files, and we’ll need to see major advances in streaming compression (not to mention home Internet speeds) to see a 4K version of Netflix’s streaming.

The practicality of 4K TVs is also a problem. You’ll need at least an 80-inch set to see the difference between 4K and today’s 1080p HD, which makes the format all but useless for people who can’t fit giant screens or a projector into their home.– Devindra Hardawar