Hey there, developer friends. Suppose you’re using New Relic to monitor your app’s performance. You like it a lot, but you also want to monitor other stuff — database performance, load balancers, caching, or even business data like conversion rates.

Starting today, you can build your own plug-in for the New Relic dashboard. You can use any kind of actionable data you can dream up. New Relic has a fancy API and two SDKs (Ruby and Java) for your programming pleasure as well as a UI builder to keep your dashboard clean and your process fast.

And speaking of fast, we’re told these plug-ins take about a day to build.

In a chat with New Relic president and chief operating officer Chris Cook and engineering vice president Bjorn Freeman, we learned that the New Relic community now includes 1.5 million apps across 50,000 customers. What that means for the New Relic platform is more opportunities for more kinds of data-monitoring and faster performance across all kinds of metrics.

“It’s going to take our SaaS platform and open it up to the world so it’ll be an extensible solution,” Cook said. “All these other things that are in your environment will now be made available on the New Relic dashboard for no charge.”

The platform is launching with more than 40 plug-ins for technologies like Apache, Nginx, CouchDB and Redis, Varnish and Memcache as well as less popular programs like SendGrid.

“We’re pretty dang excited about it,” said Cook. “And they’re really, really easy to write … . One of our customers has written 12 plug-ins in a matter of weeks. It doesn’t take very long to get up and running.”

Cook said the API and SDKs are well maintained and exhaustively documented. Once a plug-in is complete, it can be used privately within your own organization, or you can join in the free-for-all and publish it publicly to Plug-in Central, a sort of app store for New Relic plug-ins where others can download and use your work.

“It kinda sticks with our philosophy of providing more and more value, for people to have a better and better experience,” said Cook. “And it’s a better solution if people have broader capabilities and have more data in their environment.” 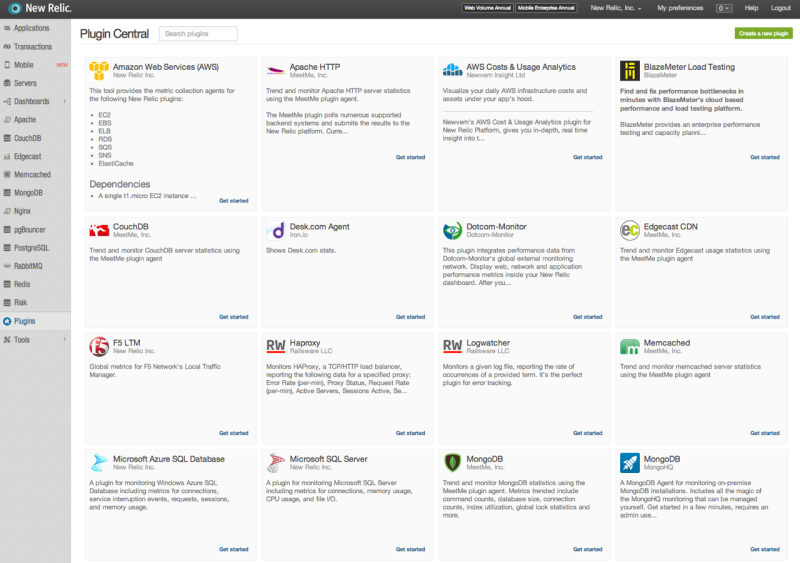 And it makes economic sense to turn to the open-source hacker community and keep plug-ins free. As Cook pointed out in our chat, hiring an engineer to write all this stuff would cost New Relic plenty of money and dilute the company’s focus.

“Trying to make money on the plug-ins isn’t worth it. We just want people to use the heck out of them,” he concluded.

And as Freeman added, “We don’t want to get into nickel-and-diming people.

“We could go out and figure out how to do great monitoring for Memcache and Redis, but instead of doing it redundantly, we decided to make it easy for the experts to send that into New Relic.”

But what about the plugin-laden New Relic dashboard? Could it maintain any semblance of functionality and simplicity?

“We did think about that exact problem,” said Freeman. “It’s not just too many data points — it’s designing plug-ins to provide actionable data for solving performance problems. With the UI builder, we’ve guided people to producing better plug-ins.”

So you’ll be asked to pick the most important metrics — the three metrics you’d want alerts for, and so on — to be added to the dashboard.

“We’re more prevalent than any other monitoring solution, and the UI that we have is arguably one of the things people love most about it,” said Cook. “And they like that we help them get to the answer more quickly. … Where else would you put that Redis data? I don’t see anything on the market that can easily take all that data and plug into a single UI.”

Also, we chatted about use cases for nonprogramming data, such as business metrics and customer stats.

“It’s intended to bring data in from other components, but we can pull in any kind of data that’s meaningful,” Cook said.

“Ticketfly wanted to take their business data and also make that available on the same screen as their performance data to see how they correlate. They built a dashboard for the [chief financial officer] … to look at things like conversion rates over time.”

Just a couple months ago, New Relic launched monitoring for iOS and Android native apps as well, expanding on its core of web monitoring.

New Relic was founded in 2008 and is based in San Francisco. To date, the company has taken a total of $115 million in venture capital over five separate rounds of funding. Its most recent round, announced just last month, was a whopping $80 million in private equity. At that time, the chief executive officer told us an IPO was in the works.