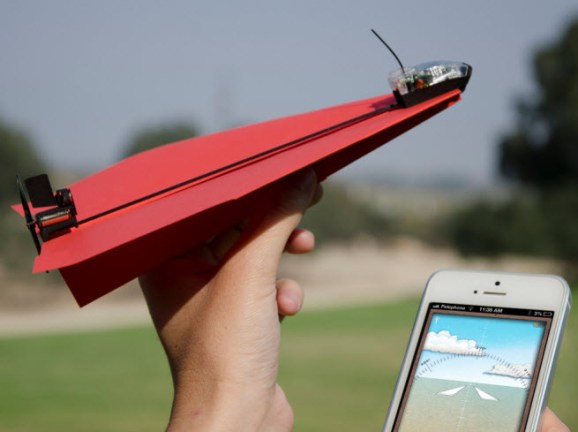 Paper airplanes are not just for teasing the boy or girl you like anymore.

PowerUp is building a little device that converts paper airplanes into smartphone-controlled flyers.

“Our goal is to make you feel like the Wright Brothers when Flyer I took to the skies,” inventor Shai Gotein told VentureBeat’s Dean Takahashi in November. “We want to empower you to design your own flyer and conquer the skies with our module.”

PowerUp’s module has an ultralight weight mini-computer on one side that is about the size of a quarter. Bluetooth low energy connects it to your smartphone, and a lithium battery power pack charges it. A thin carbon-fiber frame connects the computer to a little propeller on the other end.

The basic package comes with one module and one spare propeller and costs $30.

You attach the module to the paper airplane using PowerUps clips. From the iPhone app, you can tell the plane to ascend and descend using the “throttle lever,” tilt the phone right or left for maneuvering, and check indicators for charging status, battery level, thrust level, direction, and range.

Goitein said the plane can get 10 minutes of flight on one charge and has a controllable range of 180 feet.

He first found the inspiration for this project in 2008 when he was teaching aerodynamics to underprivileged kids in the evenings. The product has gone through multiple iterations over the years. The Kickstarter campaign for PowerUp 3.0 launched in November.

PowerUp should ship to all backers in May. It should be available for wider purchase in June. An Android version is in the works.