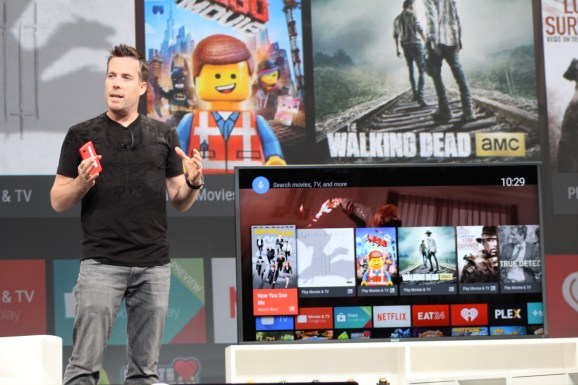 After covering Google’s I/O developer conference this week, one thing is clear: This isn’t the same Google that created Google+.

Instead, the conference showed us just far Google has come in delivering products you’d actually want to use. And, in most cases, you can also see how those products reinforce each other and Google’s services, which have typically been the company’s strength.

I predicted we’d see how Google plans to take over the world, and the company didn’t disappoint.

It all starts with Android: Google showed off a preview of Android L, its next big update, which features a bold and colorful design aesthetic that will also carry over to Google’s other products. Android L will also support a wider variety of processors, and it features a new runtime that will speed up all of its apps.

A new AndroidOne program gives Google more control over how Android hardware is rolled out in developing markets. We even got a glimpse of Android apps running on Chrome OS, which could make Chromebooks a lot more useful (right now, they’re basically just dedicated web browsers).

We also got a deeper look at Android Wear at I/O, which seems like it could be the first successful smartwatch platform. The gist of Android Wear isn’t much different from when Google announced it a few months ago — it’s still heavily focused on notifications and Google Now integration — but it was nice to see that Wear devices actually live up to all of their slick promotional videos. The Moto 360, in particular, seems like a smartwatch that could be a hit with average consumers.

Google also announced Android Auto, which brings the platform into your car, and opened up Nest’s APIs to developers the day before I/O began, giving it an even stronger foothold in your home. Google’s even taking another stab at your living room with Android TV, which rises from the ashes of Google TV.

With every passing announcement during the I/O keynote, it became clear that Android will soon be everywhere. Most importantly, it’s easy to see how we’d actually want Android to be an integral element of our lives. Google isn’t just making cool announcements with questionable utility, a la Google Glass. (Which was conspicuously absent from the show, although Google announced some minor Glass updates the night before I/O began.)

At last year’s I/O keynote, the most interesting thing that happened was Larry Page’s wild and rambling pitch for the high-tech equivalent of The Island of Dr. Moreau. There was no major focus with the product announcements last year, just minor updates to existing products.

In 2012, Google had a fairly fruitful I/O keynote with the announcement of the Nexus 7 tablet and Google Now. But that was also the year Google announced the baffling $300 Nexus Q streaming gadget (which it ultimately cancelled), and when it held a flashy skydiving demo for Google Glass. That year was a mixture of the best and worst Google had to offer in terms of products.

This week’s I/O keynote was different — it felt focused in a way that we’ve never seen from Google before.

Outside of Android, we’re seeing Google mature in important ways. The new “Material design” aesthetic will help its products feel more human, rather than something just for techies. And among its many cloud announcements, Google’s Appurify acquisition seemed particularly significant, as it gives Google a simple way to test Android apps across thousands of real devices. Eventually, it could offer that service cheaply to Android developers, which could make your apps faster and more stable.

I’m looking forward to seeing more of this new Google in future announcements. And hopefully the days of announcing half-baked products that even Google can’t seem to find a good use for (like Glass and Google+) are over.