Another Bitcoin wallet went live this morning, this one developed by a couple of recent Stanford University grads. Called Backslash, this peer-to-peer wallet leverages social media profiles to send Bitcoin, with an emphasis on ease of use.

Bitcoin has a bit of user experience problem, according to the founders of Backslash, Roneil Rumburg and Paul Benigeri. Their own inability to easily find and send money to each other was the impetus for Backslash. To combat the problem they’ve invested heavily in a searchable database of social media identities. Backslash hooks into your Facebook and Twitter accounts to make it easier to find your friends. When you send Bitcoin to a friend, they receive a message through Facebook or Twitter with a link to the coins. If your friend also has a Backslash account, you can send them money directly to their wallet.

Plenty of wallets have tried to solve Bitcoin’s ease of use problem by connecting to social media. ChangeTip focuses on sending micropayments through a slew of social media sites including Twitter, GitHub, Reddit, and Tumblr — though the app has a sending limit of $25. QuickCoin lets you send Bitcoin to your friends on Facebook. Circle prides itself on its simple interface and instantaneous transactions. Still, it’s possible that Backslash may be able to use social media better than the rest. 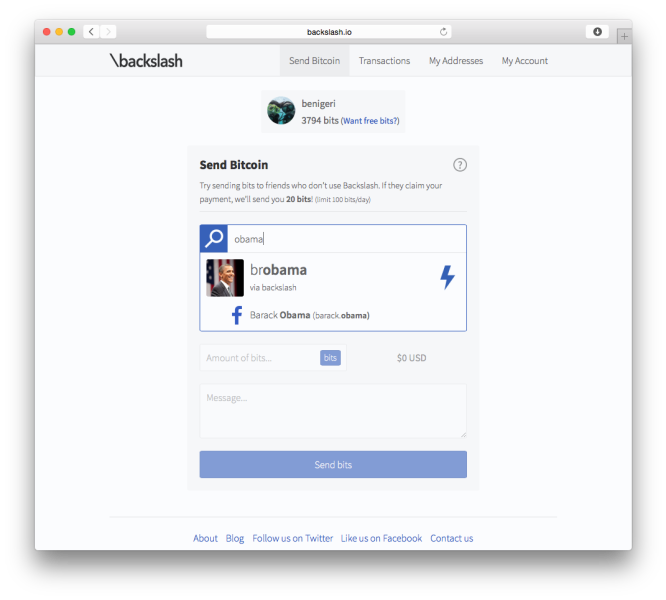 But that’s just one feature. It’s almost disingenuous to call Backslash a wallet. Though the wallet does store Bitcoin, even its founders say the company’s focus is on fast transactions rather than money storage.

“We want to remove the friction from transactions. That means that right now we have to host wallets. But we don’t want people to put a ton of Bitcoin in it,” says cofounder Rumburg.

To do this, Backslash will have to focus on getting its users to transact — an ongoing problem for Bitcoin and other digital currencies, as cryptocoin holders tend not to spend them. To encourage spending and sending, Backslash gives users “bits” (small amounts of Bitcoin) every time they get someone to sign up.

The incentive might be working. The company says that since its public beta launch in September it has attracted 15,000 users, who have made some 50,000 transactions.

As of launch time, Backslash allows users to transact Bitcoin and Dogecoin. The wallet doesn’t have a mobile app yet, though the founders say it’s in the works.