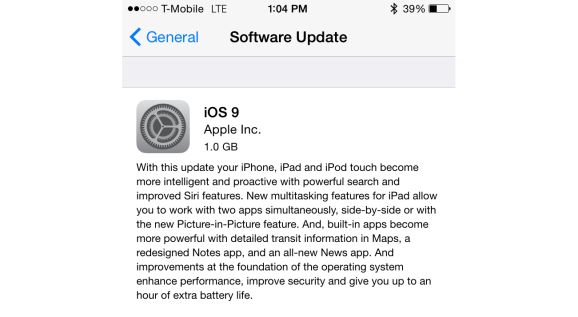 Apparently, people couldn’t wait to get their hands on Apple’s latest version of iOS.

In a press release today, the company said iOS 9 has already been downloaded onto more than 50 percent of all iOS 9 devices.

“iOS 9 is also off to an amazing start, on pace to be downloaded by more users than any other software release in Apple’s history,” said Philip Schiller, Apple’s senior vice president of Worldwide Marketing, in a statement.

Of course, given that the number of iOS 9 devices in use continues to grow each year dramatically, Schiller’s statement isn’t that surprising. But the fact that users are upgrading faster than ever is certainly good news for Apple.

The company likes to say that one of its big advantages over Android is that the vast majority of users have the latest version of iOS. This makes it attractive to developers because they can create a more consistent experience compared to Android devices, which are often split evenly over several more dates versions of the mobile operating system.

Last week, at least one metrics group predicted that iOS 9 adoption would be a bit slower at first than iOS 8 last year. The theory was that while iOS 9 was proving more reliable in testing, consumers were skeptical after some initial bugs iOS 8.

But those fears appear to be unfounded. Although iOS 9 is not a radical departure in terms of design and features, it does after some new twists. These include upgrades to Siri, a new search screen, and split-screen multi-tasking for the iPad.