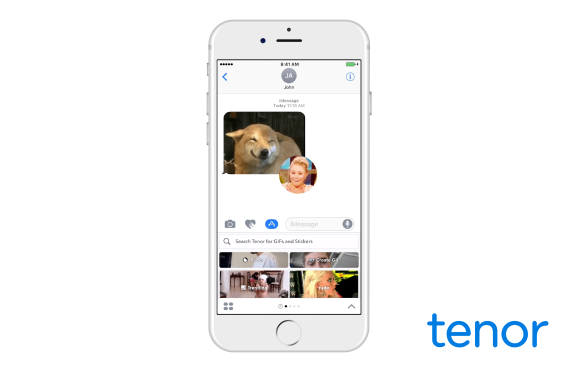 With the availability of Apple’s latest mobile operating system, today Tenor is launching an app within iOS 10’s message product. Now, you’ll not only be able to insert animated GIFs easily, but there’s a way for you to create your own GIFs using the iPhone’s camera, as well as several additional updates designed to personalize your image-based experience.

“As mobile usage increases, we’ve grown to rely on visuals such as emojis, GIFs, and stickers to better articulate the feelings, thoughts, and tone behind the words we type,” wrote Tenor chief executive David McIntosh. “This visual language has moved well beyond simple entertainment — it’s becoming a language that many are becoming fluent in and turn to in everyday conversations.”

Formerly known as Riffsy, Tenor had, until now, been just a resource people used to find the most appropriate GIF to express their feelings and reactions. But the company is now moving into a new direction by allowing people to customize those expressions.

Above: Tenor’s GIF creator in iOS 10 using the iPhone camera.

Apple has yet to reveal iMessage usage, but opening the platform up to third-party developers helps it remain competitive against Facebook, Kik, WeChat, and Line — all of which have launched a platform for their respective messaging apps. And since iMessage is a communication app, giving users greater freedom to express their feelings through GIFs is important — a picture is worth a thousand words, after all.

Adding the Tenor extension to iOS 10’s iMessage app gives you the ability to add GIFs to any conversation, as you would with Giphy. However, Tenor also utilizes a learning algorithm to surface the right image — using its “telescoping search” and “did-you-mean” suggestion feature — so the more you use GIFs, the smarter it becomes. This means it won’t show you the same images or even reaction categories that your friends have — the selection is tailored to you.

As part of this move toward greater personalization, Tenor now lets you use the iPhone’s front or rear-facing camera to create GIFs — just like Instagram’s Boomerang app does. If you’re having a conversation in iMessage and can’t find the image or words to express how you feel, why not quickly create your own GIF? Instead of having the complex workflow of opening up multiple apps, Tenor does it all within iMessage. Just tap the camera button to activate and capture up to 6 seconds that can be shared anywhere you want.

Above: Adding GIF-turned-stickers to conversations in iMessage using Tenor.

Tenor will also be bringing Snapchat-like filters to iMessage, meaning that you will soon be able insert yourself into a select GIF. The company said this offering will be available in the next week or so. Another element from Snapchat that’s being brought in is the ability to draw on and caption GIFs — find an image that works for you and edit it with text, a handwritten note, or a drawing.

Other updates include the introduction of sticker packs, meaning that you can save your favorite GIFs, organize them into groups, and share them with friends and family. This not only includes any images within Tenor’s database but also those that you create. Iff you have specific GIFs you like to use when talking about sporting events, news, politics, or technology, or you use certain GIFs on a constant basis to smack talk with your friends, packs are the answer for you.

GIFs can also now be turned into stickers — Tenor lets you press and hold on any GIF to extract a portion of it that you can drag and drop onto any message, be it a text, image, or other GIF within iMessage. Multiple stickers can be added to any message.

We’re no longer in a text-based communication era, having shifted to one in which emojis and GIFs are used frequently in our personal and professional lives. Previously, we were limited in terms of how we could express ourselves — but we can now customize the conversation so that our expression more closely matches how we, as individuals, talk.