Arable Labs has raised $4.25 million to bring data-driven analysis and predictions to farming.

The Princeton, N.J.-based startup uses sensors for the Internet of Things, or making everyday objects smart and connected, to collect data on a farm, measuring everything from air temperature to moisture on a micro level.

Agriculture is about 10 percent of the world’s gross domestic product, accounting for around $7.8 trillion. It is expected to become a $20 trillion market by 2050. Agtech, meanwhile, is generating billions of dollars in funding a year. The company will begin shipping the Arable Mark sensor platform this spring and will make it more widely available through distributors later this year.

Middleland Capital‘s agriculture technology fund and S2G Ventures led the round, which also includes participation from new investors Chase Field, Spark Labs, and Cantos VC. With the new funds, the company will support expansion of data science and analytics for the food and ag supply chain, fueled by mass production of the Arable Mark IoT device (formerly known as PulsePod) later this year. 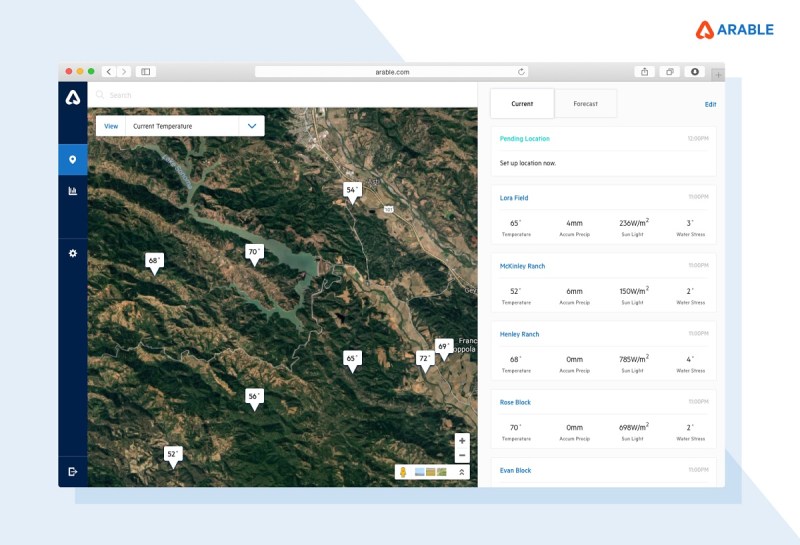 Above: Arable measures dozens of types of data on farms.

The Arable Mark offers insight into crop status and microclimate to drive operational decisions. It helps calculated crop yields and quality that aid sales and logistics decisions, and it provides retailers with traceability and offers transparency into the production conditions valued by consumers.

“Middleland and S2G are rare investors who understand the whole food supply system, from genetics and chemistry to production agriculture to the brands that bring it to our tables,” said Adam Wolf, CEO of Arable, in a statement. “What joins all these players is their shared exposure to production risk, of simply not knowing what will come out of the field in a month or even a week out. We’re excited to bring predictive analytics to agriculture and make a dent in the trillions of dollars wasted when food doesn’t make it from field to fork.”

The company said the Arable Mark measures more dimensions of physical meteorology, at greater spatial density, than any weather model or station network, and more plant attributes, at greater frequency, than any satellite or aircraft. By measuring over 40 individual environmental data streams, the Mark is the most data-rich device available in the IoT market, Arable Labs said.

“I have been incredibly impressed by the product innovation at Arable,” said Brian Mixer, managing director of Middleland Capital and new Arable board member, in a statement. “Adam and his team have developed a clear value proposition as the critical business intelligence that connects producers and processors. Accurate forecasting is in many ways a holy grail in agriculture, and Arable has brought together a rare group of product engineers, biologists, and mathematicians to solve this critical issue in the food supply chain.”

It is now possible for managers to benchmark crop performance and seasonal progress across hundreds of fields while also being able to drill down and understand the details of growth or weather events. The data synthesis of weather and crop growth enables Arable to predict timing, quality perishability, and yield. The company plans to expand the Insights platform data interoperability with a number of key integrations throughout the year, particularly Valley Irrigation’s AgSense and Irrigation Exchange. 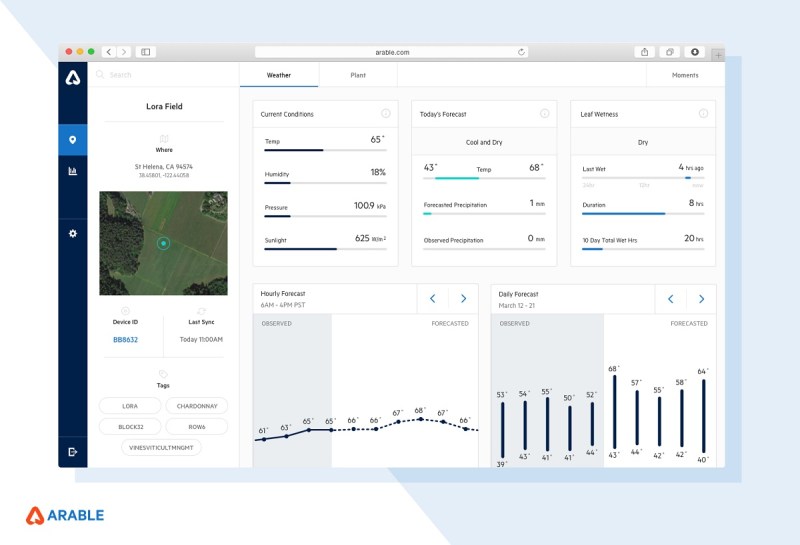 “We’ve been waiting for someone to bring the Internet of Things and predictive analytics to agriculture, similar to the surge we have seen in medicine, energy, transportation, and other traditional industries,” said Sanjeev Krishnan, managing director at S2G Ventures, in a statement. “Arable is solving the financial risk embodied in transactions between growers and processors, especially in specialty crops that exist outside of commodities exchanges.”

During the past year, Arable field-tested the Mark with dozens of high­-profile beta partners, including Fortune 500 agribusiness and government agencies who validated the Mark’s value across the entire food supply chain.

The Mark comes equipped with cellular (2G/3G), Wi-Fi, and Bluetooth for continuous connectivity. In addition, the Mark will be available with two different mounting configurations to cover nearly all applications: a vertical stake to sit above crops atop any pole, and a horizontal mount to attach to center pivots and pre-existing infrastructure.

The mounting system can be augmented with an imaging device for computer vision applications, and an additional accessory port allows for wired sensors (such as soil moisture or irrigation monitors), or even sensors communicating with LoRA or Sigfox to be used with the Mark telemetry system.