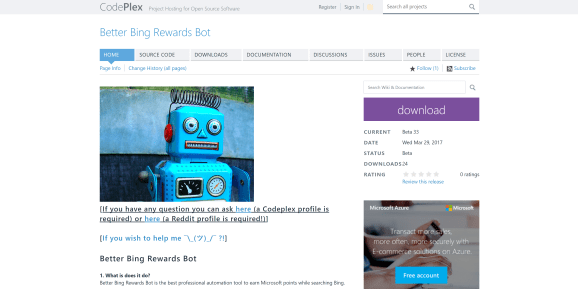 Microsoft today announced that it’s shutting down CodePlex, its service for hosting repositories of open source software. The service launched in 2006, and now it will be going away on December 15.

While people will be able to download an archive of their data, Microsoft is teaming up with GitHub, which provides similar functionality for hosting code that people can collaborate on, to give users “a streamlined import experience” to migrate code and related content there, Microsoft corporate vice president Brian Harry wrote in a blog post.

“Over the years, we’ve seen a lot of amazing options come and go but at this point, GitHub is the de facto place for open source sharing and most open source projects have migrated there,” Harry wrote.

Microsoft has been leaning in more and more to GitHub in the past few years. It moved the CNTK deep learning toolkit from CodePlex to GitHub last year. Today Microsoft’s GitHub organization has more than 16,000 open source contributors, Harry wrote. And last year GitHub itself made a big deal about Microsoft’s adoption of GitHub.

GitHub just posted the 2016 Octoverse, the first one since 2013. Microsoft has the most open-source contributors https://t.co/gX3QfDzRfH

At the same time, CodePlex has rotted. In the past month people have made commits to fewer than 350 projects, Harry wrote.

Last year Google shut down its own service, Google Code.

Open source software was not historically at the core of Microsoft’s culture — after all, Windows and Office are proprietary — but in the past few years that has changed. The company open-sourced .NET, and it launched a Visual Studio Code open source text editor in 2015. It open-sourced PowerShell in August.

People can no longer create new projects on CodePlex, Harry wrote. The site will become read-only in October before it shuts down in December; from there people will still be able to browse through code “as it looked when CodePlex went read-only,” Harry wrote.