Twitter wants you to know that it hasn’t given up on developers and that it’s charging forward with efforts to make it easier for them to build applications on its platform. Today, the company announced a more “unified” API platform, which it said came about through feedback gleaned from its #HelloWorld tour last year. In addition to adding new features and streamlining APIs, Twitter has published its 2017 roadmap so developers can be aware of upcoming improvements.

“One of the most common requests we hear from developers is for an easy and predictable way to smoothly scale access to Twitter’s APIs,” wrote company staff developer advocate Andy Piper, in a blog post. While developers generally have access to the standard REST and streaming APIs, the real power comes through Gnip, the company Twitter acquired in 2014. The disparity between the haves and have-nots caused some soul-searching on Twitter’s part, and later this year the company plans to launch a “new developer experience” that merges the free and easy access of the REST and streaming APIs with the enterprise-level features of Gnip.

“The goal is to create an integrated Twitter API platform that serves everyone, from an individual developer testing a new idea to Twitter’s largest enterprise partners,” Piper said. As a result, there will now be individual APIs for accessing the Twitter firehose and tweet archive and for receiving real-time activities for an account — including tweets, direct messages, likes, and follows.

Twitter will also implement new tiers of access, with a free plan for those needing access to test and build new products; a self-serve, paid tier with undisclosed advance functionality and higher rate limits; and an enterprise-level plan targeted at strategic partners. Specific pricing has not been revealed, but the company promised that it’ll “clearly define” the scope and costs for each tier. 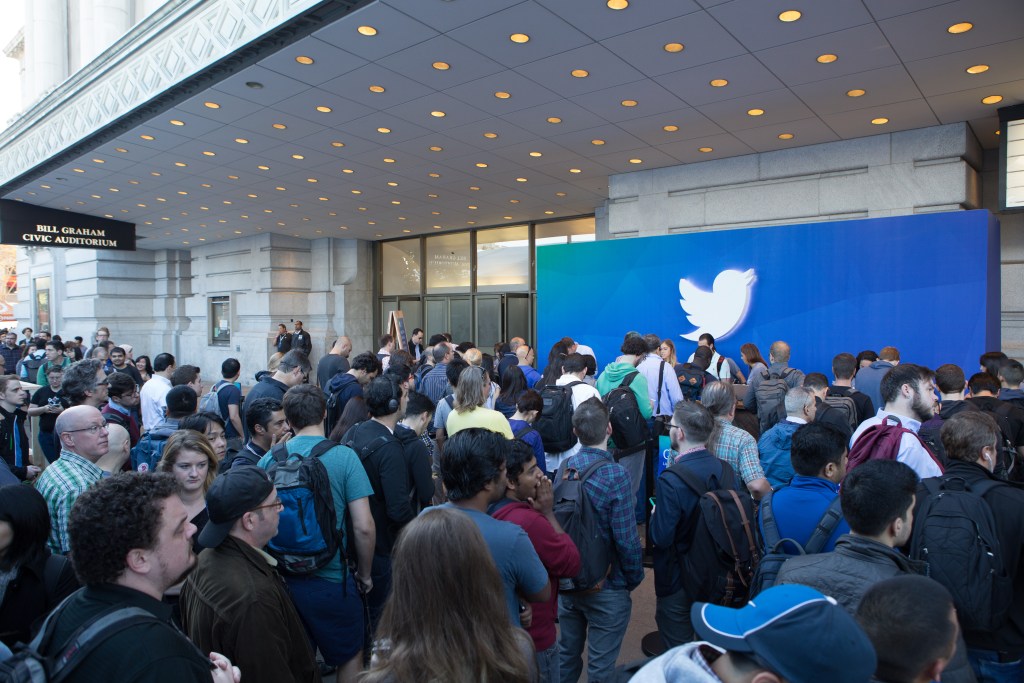 Above: Developers line up in front of the Bill Graham Civic Auditorium in San Francisco, Calif. for Twitter’s Flight conference on October 21, 2015.

While the upgraded platform experience won’t be available until later, Twitter has some news about developer products. Starting today, app makers can take advantage of the following:

But as new products come online, legacy services will be retired, and the latest casualties include feeds for user and site streams, which have been replaced by the Account Activity API. The direct message REST endpoints will eventually replace the existing send and retrieve message endpoints. Developers shouldn’t panic about the change, however, because Twitter plans to “provide at least a six-month migration window” after the newest services emerge from beta.

“We see a huge opportunity for businesses to harness the power of Twitter in all aspects of their operations — from responding to customer needs and creating delightful customer experiences to identifying emerging trends, making better products, and more,” Piper said. “By supporting developers who are building to address unique business needs, we’ll create new sources of revenue and a better experience for everyone. The value created through these efforts is ultimately good for anyone building on our platform, as it will fund the investments that will support the innovations of tomorrow.”

The future of Twitter’s platform 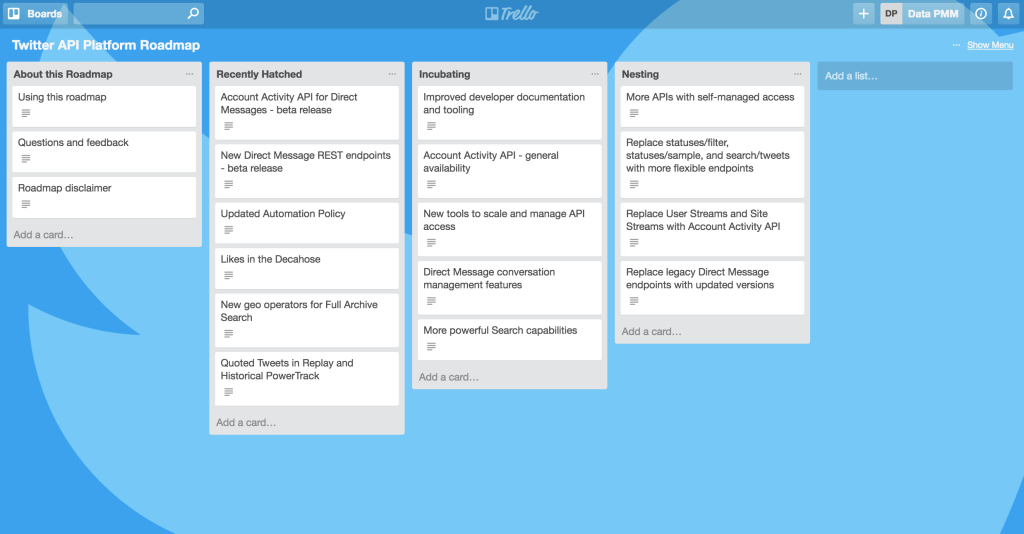 Above: Screenshot of Twitter’s API platform roadmap for 2017.

Twitter doesn’t want you to think of its developer platform reorganization as a course correction but rather as a significant investment it’s making around engineering and product. Through this evolution, the company is likely adjusting to developers’ needs, which have changed over the past few years.

And while Twitter has long admitted that it screwed up its relationship with developers in the past, to reinforce the message that it cares about the community, the company has published its 2017 roadmap, taking a similar approach to Slack’s. The idea is to keep developers informed about what activities and updates will be made over the next 12 months so as to provide enough time for them to give feedback and adapt to the changes.

The roadmap is available through a Trello board and is not broken out by timeline, but rather by stages. You’ll be able to see what ideas are being thought about, being incubated, and are in active production. Features Twitter is already pondering include additional APIs with self-managed access and additional endpoints. The team is also considering developing advanced search capabilities — something that would provide free access to a seven-day lookback window and higher fidelity data retrieval than is currently possible, as well as tools to scale and manage API access, improved documentation and tooling, and more. 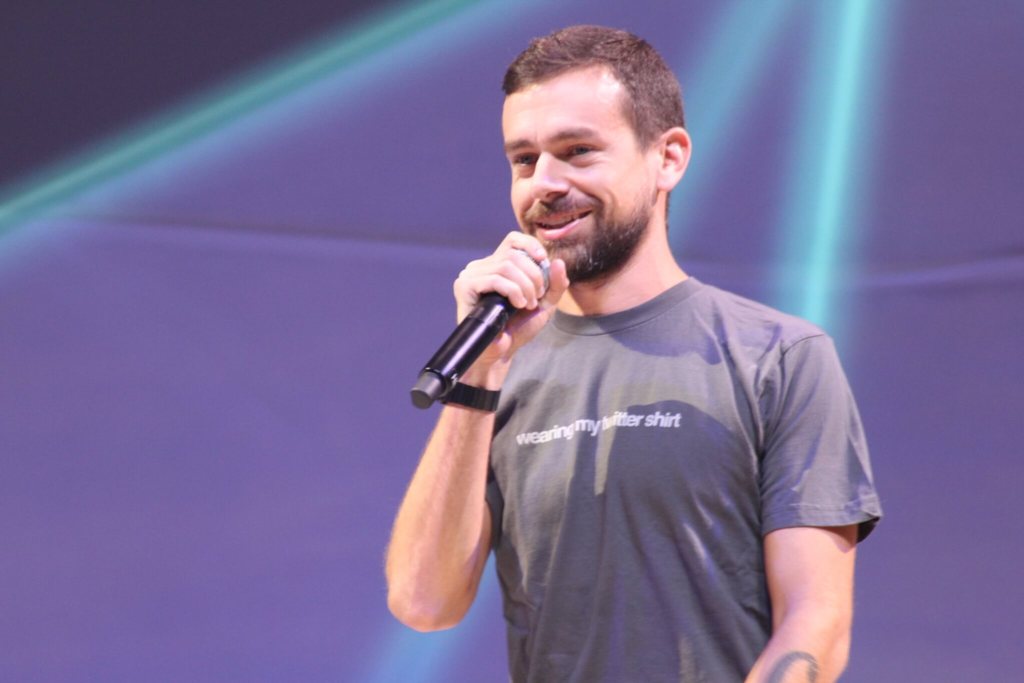 Above: Twitter CEO Jack Dorsey onstage at the Flight developer conference on October 21, 2015 at the Bill Graham Civic Auditorium in San Francisco, Calif.

Some developers are likely still wary of Twitter, with reluctance to trust the company stretching back years to when Twitter first held its Chirp conference. “Somewhere along the line, our relationship with developers got confusing, unpredictable,” said company chief executive Jack Dorsey in 2015, as he apologized for how developers had been treated. He pleaded for a reset of relations, and the developer evangelist team embarked on the #HelloWorld tour with the message: Give Twitter another chance.

For a while, things seemed to improve, and the company appeared to be listening to feedback from the community. But then Twitter’s evangelists started to leave, first former developer relations head Jeff Sandquist, then senior developer advocate Romain Huet, platform relations lead Prashant Sridharan, and developer advocate lead Bear Douglas.

Something that surprised many was Google’s acquisition earlier this year of the company’s mobile developer platform, Fabric. Seeking to assuage fear about the stability of Twitter’s developer platform, Dorsey emphasized that investment would still be made into core products and business, as well as into Twitter’s public APIs, Twitter Kit, TweetDeck, MoPub, and Gnip.

Today’s announcement appears to be a sign of that investment, and shows the company doubling down on APIs and Gnip in an effort to strengthen something developers are already using. Twitter declined to provide numbers for how many developers currently use its tools.