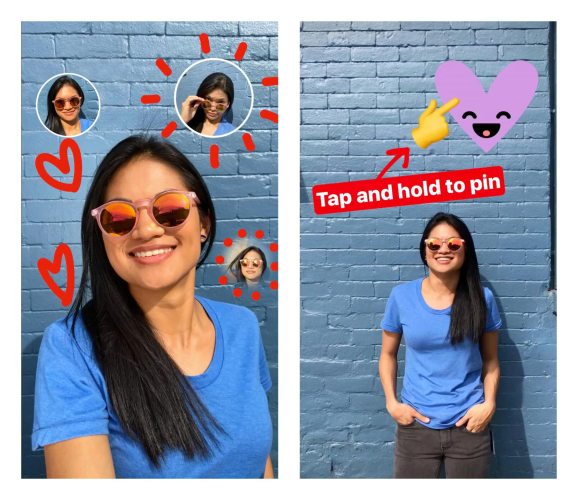 Instagram has added selfie stickers and lets you pin stickers to videos within Stories.

Instagram is seeing continued growth in the number of people using its Snapchat Stories-like feature. Five months after launching, the company revealed that 150 million people were using Instagram Stories daily. And four months later, that number has grown to 200 million.

Although Instagram said that 200 million people use the stories feature every day, it’s unclear what the breakdown is between creators and those who only view stories from friends and those they follow.

To mark the occasion and encourage usage, the Facebook-owned subsidiary is launching new tools, such as a selfie sticker and the ability to pin stickers to your video Stories, and is even expanding access to geo-stickers to Chicago, London, Madrid, and Tokyo. Basically, more Snapchat features are being incorporated into the photo-sharing app.

Seeing that Instagram’s main appeal is in sharing expressive works of art and creativity, more tools to facilitate that could help keep people interested in the service. There’s certainly no shortage of places where you can find ephemeral messaging, including Snapchat, Facebook Messenger, and Facebook itself.

With selfie stickers, the idea is to capture your facial reaction and let you quickly paste it onto a photo or video. After you’ve created a story, tap the smiley face and there will be a new sticker with a camera icon that lets you capture what Instagram calls a “mini-selfie.” You can apply different frame styles to this selfie sticker and apply it to your post, adjust the size, and use it in combination with the other special effects, filters, and stickers the app offers.

This can come in handy when you want to have a pop-up bubble showing your reaction to a moment. Say you’re at a sporting event and something wild happens, such as an amazing three-point shot by Golden State Warriors’ star Steph Curry (it’s been known to happen). Normally you’d record the moment within an Instagram Story, but how will people know what your reaction is? Now you can put a selfie sticker in the story to paint a complete picture.

Selfie stickers can also be used to trade faces with someone else in the photo — similar to a filter in Snapchat.

Instagram has also added support for sticker pinning into videos. Also bearing some similarities to Snapchat, this feature lets you place a sticker in a particular spot in your Story video. Tap and hold the sticker, move it over any object in the frame, and confirm its placement by tapping the “pin” button. This works with any text and sticker and can be used in Boomerang and hands-free video, but it doesn’t seem to work with live videos. Multiple stickers can be pinned to a video.

Last month, Instagram announced that it was bringing geostickers to Stories, but that it was still in the early stages and would only be available to those in New York City and Jakarta. Four more cities will be getting access to this feature soon, and the company has enlisted the help of local community members to create these geostickers — something like what Facebook has done with its own Stories stickers. When you see these customized stickers, you can tap on the username to view more about the artist.

While the company declined to explain how it selected the latest cities to trial geostickers, one might assume that it’s based on app activity and usage.