Ten years ago, Facebook held the first F8 developer conference where its platform debuted. Since then, a myriad of tools have been released to allow developers to build websites, apps, and bots on top of the social network and its “graph” of data. This year, the company is launching a new initiative with the goal of empowering developers to help one another build on its platform.

Called Developer Circles, this is a group program that brings together developers in local areas to not only build together, but also connect and learn from one another. Each chapter will have a forum on which members can share knowledge and ideas while also discussing the latest updates from Facebook and the rest of the industry.

“One of the economic concepts applied to the developer community is [known as the] ‘multiplier effect,’ an idea that, for example, if you have a government, city, or municipality that’s investing in a road, etc., investment leads to people, commerce, trade, and more investment and trade. If you invest in the right way, it’s multiplied,” explained Ime Archibong, Facebook’s vice president of product partnerships.

Previously, developers had FbStart as one of the primary support services, but that wasn’t readily available to everyone. With Developer Circles, developers don’t have to directly rely on Facebook, but can reach a group of like-minded professionals for help. Each of these communities is led by someone local, and interactions can be done through Facebook Groups. Through this, developers can converse with one another, find tutorials and educational resources powered by Udacity, and more.

“We’re excited to provide a new learning opportunity to a developer ecosystem rich with talent and innovation. Our collaboration with Facebook aims to infuse this ecosystem with the tools and techniques developers need to spread innovation across the globe,” said Udacity’s senior director of global partnerships Hillary Mickell in a statement.

Archibong said that Developer Circles had been privately piloted over the past year and that there are “dozens” currently around the world. “If you’re a student learning what code is, you will be able to find a supportive community [with Developer Circle],” he remarked.

For those interested in building on Facebook, but maybe don’t know how to start, Developer Circles could be helpful in providing insights, inspiration, and advice on avoiding pitfalls. Using Facebook’s Social Graph and other tools, developers can find others who face similar issues when building out their bot, website, or app, then exchange ideas and help troubleshoot each other’s projects. It could also be a resource for those looking to get their startup off the ground. If that startup is successful, it could graduate to FbStart, from which Facebook has doled out $250 million in benefits to date.

“Our goal is to empower developers, similar to existing Facebook programs like FbStart, which for the past several years has focused on helping early-stage startups succeed,” the company said in a statement.

Archibong stated that he would love to see someone who joined a Developer Circle, learned how to code, and met like-minded people raise money and eventually apply to FbStart.

“We see the type of impact happening in the community,” he said.

At F8, Facebook is also announcing enhancements to several platform products, such as Login, Account Kit, and Analytics, and introducing its Places Graph API.

Facebook Login and Account Kit are two ways for users to authenticate using their social media credentials. The former is currently used by more than 85 percent of the top 100 grossing apps in the United States, while the latter, which launched a year ago, has a 80 percent “conversion rate,” according to Facebook, for those who logged into an app on the same day.

Starting today, Facebook is adding new ways to help users when they’re having trouble logging in to apps because of a forgotten password or failing to add a secondary communication channel. Developers can now implement the following: 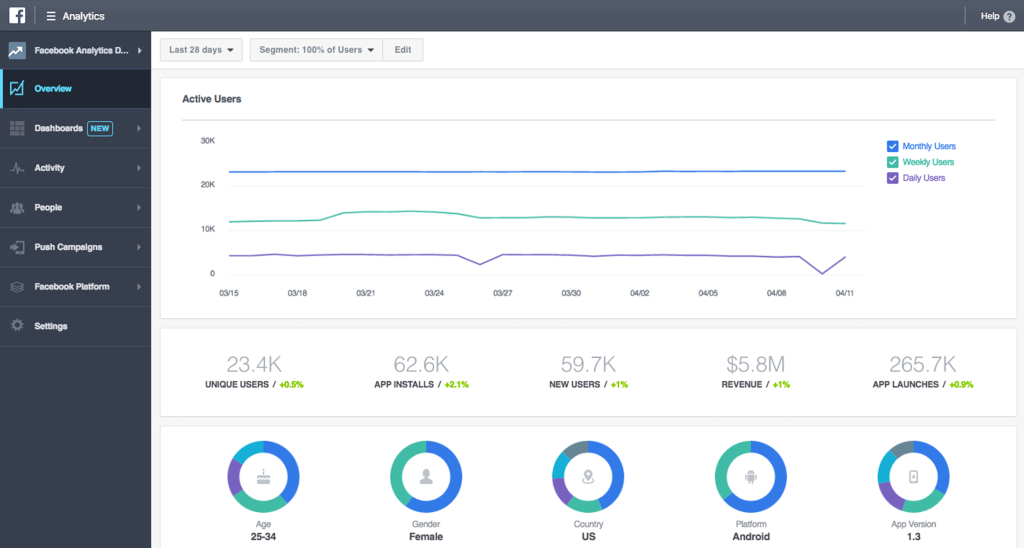 More than 1 million bots, websites, and apps are using Facebook’s analytics service. On Tuesday, it’s being extended to include Pages and offline conversions. The company is also using artificial intelligence to provide automated insights and make it easier for developers to make decisions daily. Here are the new tools available in open beta:

Lastly, Facebook is opening up access to its Places Graph, location data that is powered by check-ins and more. Apps can now tap into information about 140 million places around the world for free, creating a potential rival to Foursquare and Google. Developers can pull data from restaurants, parks, retail stores, and local businesses, getting details about their names, addresses, photos, consumer ratings, and more.