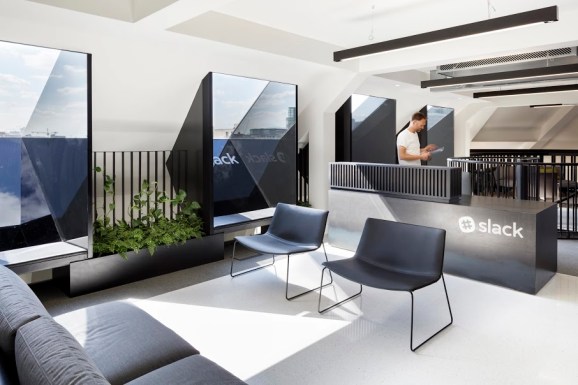 Slack, the company behind the popular business-focused team chat app, has opened its first U.K. office, its second in Europe.

Slack opened its first office outside of North America in Dublin back in 2015 and recently moved to a new, bigger base in the Irish capital. As its official European headquarters, the Dublin office currently houses 70 staff, though this is expected to rise to 180 by the end of the year.

Located in central London (where else?), Slack’s new hub will initially house just five employees, but the company expects to grow the U.K. team up to 400 percent by the end of 2017, with a specific focus on sales. Though London is playing second fiddle to Dublin from a European presence perspective, the U.K. capital actually represents Slack’s most active city in Europe in terms of users and is in the company’s top five globally.

“We’ve seen terrific growth outside of the U.S., particularly in Europe,” explained Johann Butting, Slack’s head of EMEA sales. “Slack usage in the U.K. has doubled over the past year. The decision to open a London office and establish a larger Slack presence here was a simple one, driven by customer demand and our priorities both in the short and longer-term.”

Founded out of San Francisco in 2009, Slack has become a major force in the team communications realm and has raised north of $500 million. Though the company has blazed a trail in the business productivity app space, heightened competition from the likes of Microsoft, which launched a competing product last year, led Slack to take out a full-page ad in the New York Times and has caused some to question Slack’s longer-term prospects.

For now, though, Slack is continuing to ramp up its global credentials, and the company now claims hubs in its native San Francisco, Dublin, New York, Melbourne, Vancouver, and London.

“In London, we’re super excited to be hiring talented people as we grow, to build meaningful partnerships and continue to help make people’s working lives simpler, more pleasant, and more productive,” added Butting. “The city is home to a highly skilled talent pool of people and a vibrant business community, which will only help us as we continue to expand across the region.”

Today’s news comes just a few days after Slack revealed it was getting into the conference business with the launch of Frontiers, an industry event centered around the future of work.