Facebook’s role in the spread of “fake news” has come under greater scrutiny in recent times, with many believing that the social network played a decisive role in both the U.S. presidential election and the U.K.’s EU referendum. And this is why Facebook, among other technology companies, has been investing in initiatives to show that it is actively trying to thwart spurious news sources on its platform.

As part of this effort, Facebook has today taken out full-page ads in U.K. newspapers ahead of the general election that’s scheduled to take place next month. These ads are designed to educate the public about how to spot fake news online.

Appearing in nationwide publications, including the Guardian and the Telegraph, Facebook’s “Tips for spotting false news” ad is similar to the one it published in France last month and covers such areas as being skeptical of misleading headlines, spotting manipulated images, and checking the URL of the story. The advice offered may not always help, however — under “Consider the photos,” for example, the text reads: “You can search for the photo or image to verify where it came from.” But anyone requiring advice on how to spot fake news through a newspaper ad likely isn’t tech savvy enough to know how to do that or to even understand what it means. 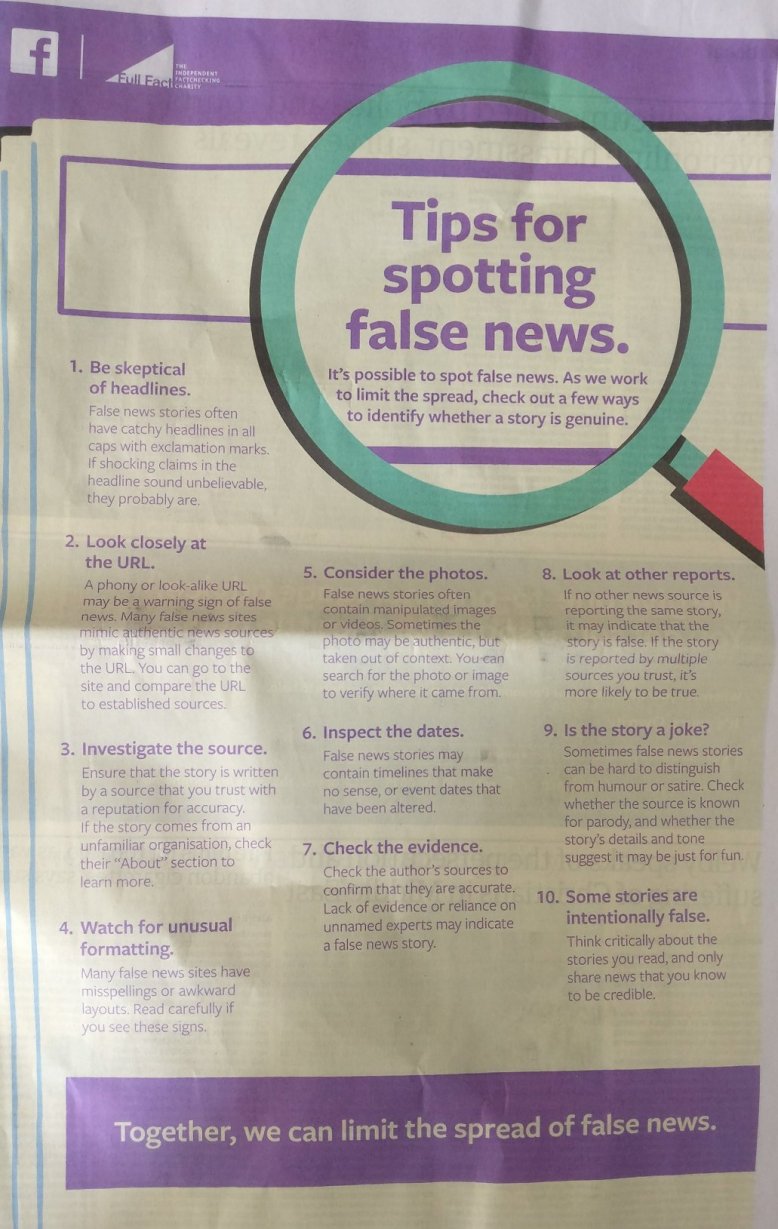 Alongside these ads, Facebook also revealed that is has deleted “tens of thousands” of accounts that it believes were deliberately spreading fake news and that it is also updating its algorithms to demote articles it suspects of carrying dubious messaging.

This latest move comes hot on the heels of a number of other efforts from tech firms trying to kill the spread of fake news. Back in February, Google and Facebook teamed up to help French newsrooms combat fake news ahead of the presidential election, while last month Google expanded its Fact Check tag globally to help publishers highlight news that has been independently verified. And a couple of weeks later, YouTube revealed plans to educate U.K. kids on how to combat fake news, echo chambers, and hate speech.

This all follows Germany’s recent approval of a new bill that may lead to technology firms being fined for failing to remove content such as fake news and hate speech.