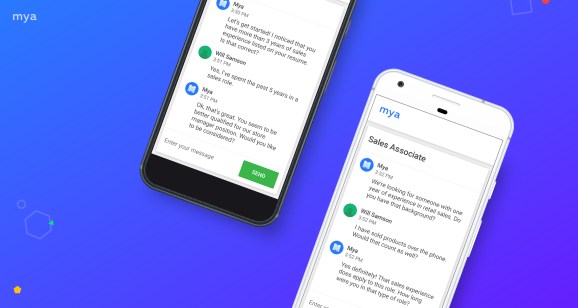 Mya Systems, formerly known as FirstJob, today announced funding of $11.4 million to further develop its recruiter chatbot, which uses artificial intelligence (AI) to automate outreach and communication with job candidates. Emergence Capital was the sole investor in this round.

“The existing recruiting landscape is made up of Applicant Tracking Systems (ATS), online assessments, job boards, and professional networking sites,” wrote Mya Systems’ founder and CEO, Eyal Grayevsky, in an email to VentureBeat. “The market is broken, as evidenced by the fact that 75 percent of workers submitting applications don’t hear back from employers and 54 percent of employers say it’s become more difficult to find qualified candidates.”

Mya Systems launched Mya last year and is on pace to interact with a total of 2 million candidates by the end of this year, according to Grayevsky. “That translates to over 50 million messages, each representing multiple candidate data points,” he wrote. Mya uses natural language processing and machine learning technologies to automate the pre-screening process of hiring — things like sourcing, scheduling, and onboarding. The bot communicates with candidates via different channels, including SMS, email, and Facebook Messenger.

The cloud-based technology, which integrates with the customer’s existing ATS, career site, and calendar systems, is currently in private beta. According to Grayevsky, the startup works with three of the five largest recruiting agencies, as well as with several Fortune 500 companies.

The recruiting sector has seen several applications of AI, such as Teamable, which taps into employees’ social networks for better referrals, and Beamery, which uses a hybrid of customer relationship management (CRM), marketing, and AI to treat candidates like customers.

Founded in 2012, San Francisco-based Mya Systems has raised a total of $11.4 to date — the $3 million seed round raised in 2012 converted into this round, wrote Grayevsky. The startup will use the new capital to hire additional machine learning engineers and data scientists, increasing its team to 20 employees by this summer.