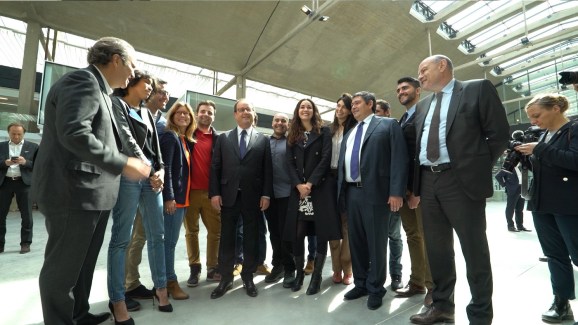 Hollande, whose administration launched La French Tech program to accelerate France’s startup economy, has announced he will move his foundation to Paris’ Station F, the startup campus that will open this summer as a home for more than 1,000 startups.

At Station F, he’ll be surrounded by a buzzing hive of startup activity when the campus opens this summer.

Funded by French telecom entrepreneur Xavier Niel, the ambitious project aims to attract 1,000 startups to its $265 million campus, a renovated historic train station in the heart of Paris. In recent weeks, Station F has been announcing partnerships with high-profile names, including incubators sponsored by Facebook and Zendesk, a travel perk offered by Airbnb, and office space for Amazon mentorships.

In the most recent announcement, Station F also noted that Silicon Valley’s Plug and Play will open a fintech and insurance tech accelerator. The campus is also adding a medtech incubator and an incubator for Franco-Chinese startups.

Station F will have three sections: a space with 3,000 desks for startups, an event space for conferences and meetings, and a retail zone for the public that will include four kitchens and a bar open 24 hours a day.

The mix of tenants will also include venture capital firms, a fab lab hacker space, and several corporate partners. As part of the project, Station F is also redeveloping two nearby buildings that will offer subsidized housing for 600 people who are in some way connected to the campus.

The first group of tenants is expected to move in by early July, which is interesting timing given that it coincides with the start of summer holidays in France. Much of the country is shut down for August holidays.

Here’s Hollande speaking at Station F, in case you want to get your French on: